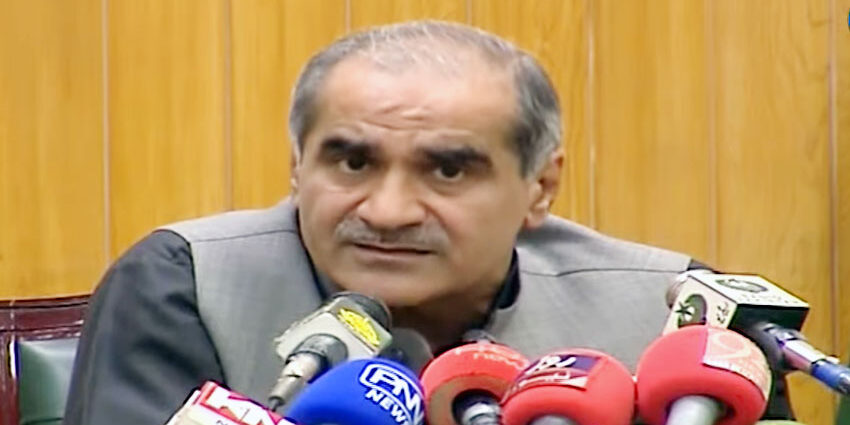 The Pakistan Muslim League-Nawaz (PML-N) on Saturday rejected the decision of the Lahore High Court (LHC) to restore Chaudhry Parvez Elahi as Punjab Chief Minister and his cabinet.

The government also demanded a suo motu notice from the Supreme Court of Pakistan, requesting that the incumbent provincial government should be limited to the powers of carrying out day-to-day affairs only.

Saad Rafique stated that LHC’s decision to reinstate Elahi does not meet the requirements of justice, adding that there are ‘flaws’ in it. He furthered that PML-N will most likely challenge the decision and that no institution can deviate from the Constitution.

The minister added that the court has given 18 days during which there is “fear of horse trading”.

Saad Rafique said elections will be held in the country at the stipulated time. He said the coalition government was formed through a constitutional change. He said that we have saved Pakistan from becoming bankrupt. Railways Minister said that PTI has two provincial governments but both are not serving general public.

Interior Minister Rana Sanaullah said that assemblies are constitutional institutions and should be respected and not ‘turned into a joke’. “If the assemblies are being dissolved due to someone’s stubbornness and ego, it is the duty of the governor to at least ask for a vote of confidence,” said Rana Sanaullah.

The minister added that the court granted complete relief in the form of interim relief, adding that it is never the case that final relief is granted in interim relief.

Requesting the apex court to review the decision and take suo motu notice, the minister said that it is likely that the LHC’s decision to restore Elahi will create legal, constitutional, and economic complications which will seriously affect the province.

“As there is an apprehension of horse trading, the court should have allowed only day-to-day matters under Article 133 in interim relief,” added the interior minister.

The minister reiterated that the party is fully prepared for the elections but demanded that the chief minister take a vote of confidence before dissolving the assembly.

Rana Sanaullah said the governor has the constitutional right to ask the CM to attain a vote of confidence if he plans to dissolve the provincial assembly to satisfy someone’s ego. He added that they would not let two provincial assemblies fall prey to [PTI Chairman] Imran Khan’s arrogance. “PDM is trying to ensure that all the assemblies complete their tenure,” he said. The PML-N leader added that if the PTI and PML-Q had the numbers, they would not have run from the vote of confidence.

Rana Sanaullah said they sacrificed their political capital to save the country from default; however, Imran Khan tries to push the country into turmoil daily. He added that they do not intend to escape elections; in fact, they are preparing their candidates for general polls.

Rana Sanaullah added that the LHC provided ultimate relief to Parvez Elahi. He added that he has heard PTI is offering Rs20 million to their estranged MPAs.

Interior Minister said PTI Chairman Imran Khan had announced to dissolve Provincial Assemblies of Punjab and Khyber Pakhtunkhwa but he could not do so.

On the occasion, Tariq Bashir Cheema said that the majority of the PTI is not in favor of dissolution of assemblies, adding that the federal has made decisions through consultations and will do the same in future. He said that PML-Q members of Punjab Assembly are in contact with Chaudhry Shujaat Hussain and better results will come.

Post Views: 45
2022-12-24
Previous Post: SSG is the pride of Nation & it had proved it’s metal over the years. Syed Asim Munir
Next Post: Tehreek-e-Insaf to issue white paper on economic situation: Fawad Chaudhry