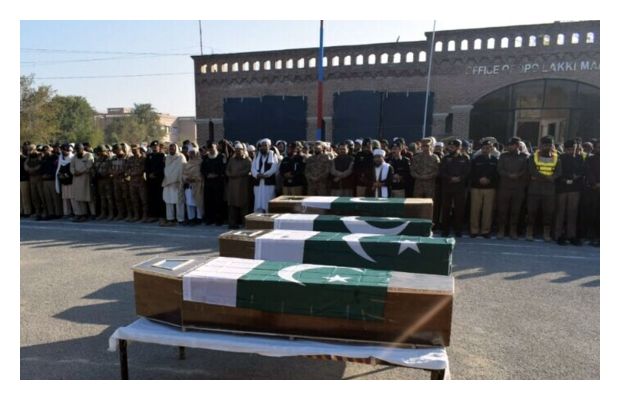 At least four police personnel were martyred and as many others wounded in an overnight terrorist attack on the Bargai Police Station of Lakki Marwat on Sunday.

Terrorists launched an armed assault on the police station from two sides. A fierce exchange of fire too 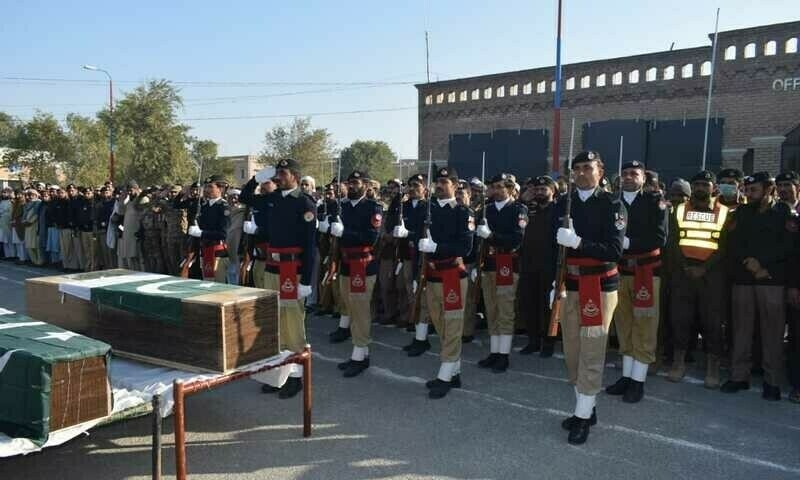 k place between the police and the outlaws that left four policemen dead and as many injured.

The attackers escaped after the assault. Police have launched a search operation in the area for the saboteurs.

Constables Ibrahim, Imran, Khairur Rahman and Sabz Ali are among the deceased.

Funerals for the slain policemen were held at the Lakki Police Line on Sunday morning, which were attended by Regional Police Officer Bannu Syed Ashfaq Anwar, District Police Officer Ziauddin and senior military and civil officials.

Meanwhile President Dr. Arif Alvi and Prime Minister Shehbaz Sharf have expressed resolve to continue efforts to completely eliminate the remnants of terrorism in the country.

The president also expressed sympathies with the bereaved families and prayed for the high ranks of the departed souls and for the early recovery of the injured.

The Prime Minister paid tribute to the four martyred policemen and expressed sympathy to the families.

He said Police officers and jawans have made great sacrifices against terrorism and the nation salutes them. He further said eliminating terrorists, their supporters and facilitators is a top national priority.

Highlighting that the “increase in terrorism incidents in KP was concerning”, Asif Ali Zardari demanded strict measures to be taken to suppress terrorists.

Meanwhile, Khyber Pakhtunkhwa Chief Minister Mehmood Khan also condemned the attack and sought report on the matter. He also ordered best medical aid for the injured cops. “The incident is extremely unfortunate. The sacrifices of the martyred will not go in vain,” he vowed. Provincial Chief Minister also sought a detailed report from the Inspector General Police.

Interior Minister Rana Sanaullah Khan prayed for the martyrs’ families to have patience during the tough time. He also took a jibe at the KP chief minister saying, “CM should seriously give attention to the law and order situation (in KP); he should spend more time in his province and less in Zaman Park (PTI Chairman Imran Khan’s residence).”

The PML-N leader reprimanded Mahmood asking him to “fulfill the responsibilities of protecting the people’s lives and belongings rather than becoming an instrument of sedition”, referring to his support for Imran Khan.

Rana Sanaullah expressed his concern, “If attacks are taking place on the police, then what would be the condition of the public’s protection?” He asserted that the federal government is ready to “help and cooperate” with the KP government in “every possible way”.