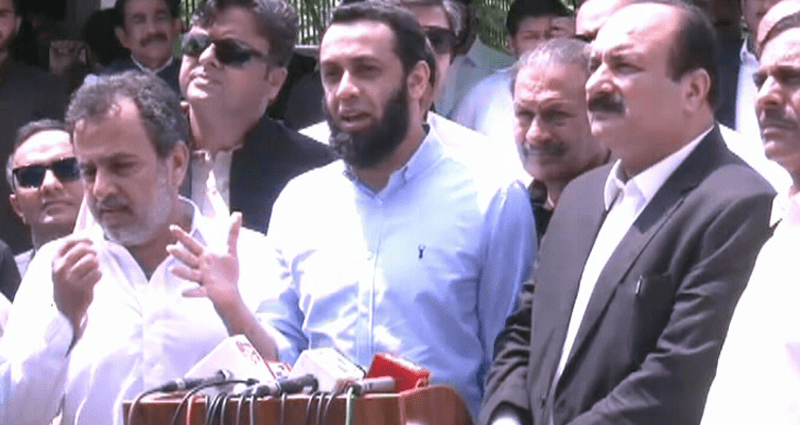 12 leaders of PML-N approach IHC for securing protective bails 'All of you’ will be arrested if one PML-N worker is arrested, Attaullah Tarar warns PTI & Punjab govt

‘All of you’ will be arrested if one PML-N worker is arrested, Attaullah Tarar warns PTI & Punjab govt

Pakistan Muslim League-Nawaz (PML-N) leader and Prime Minister’s Special Assistant on Anti-Narcotics Ataullah Tarar Advocate decried on Saturday the Punjab police’s move to raid the residences of his party’s lawmakers and register cases against them as an act of “revenge” for legal proceedings initiated against PTI’s Dr. Shahbaz Gill over his controversial remarks during an ARY News bulletin. Attaullah Tarar warned the PTI and Punjab government that “all of you” will be arrested if a single PML-N worker is sent behind bars.

The press briefing of Ataullah Tarar came after 12 PML-N leaders approached the Islamabad High Court (IHC) on Saturday seeking protective bail in a case related to ruckus in the Punjab Assembly during the chief minister election. A district court issued their arrest warrants a day prior.

While talking to media person on Saturday outside IHC, Ataullah Tarar said the raids were carried out on the instructions of the Punjab government — where an alliance of the PTI and PML-Q is at the helm — and warned Chief Minister Parvez Elahi’s government that they “will face the consequences of the trend of revenge they had set”.

“Parvez Elahi sahib, you and your son (Moonis Elahi) will face the consequences of this new trend that you have set,” Tarar reiterated, claiming that Moonis had been issuing instructions for action against PML-N leaders despite not having any official authority.

During his media talk on Saturday, Tarar, whose house was raided in connection with the April 16 episode for the second time on Friday night, maintained that while PML-N lawmakers were being booked for the provincial assembly attack case, “Parvez Elahi and his companions” were the “actual suspects”.

The PML-N leader also alleged that during last night’s raids, police had “stolen” valuables from the MPAs’ residences. He also linked the action against his party’s members to the “promotion of an anti-state narrative”, alluding to Gill’s controversial remarks.

Tarar alleged that CM Elahi had “fully facilitated Imran Khan in promoting this anti-state narrative”, adding that Elahi was “at the forefront of exacting revenge from us”.

He went on to claim that Elahi and Moonis had directed jail officials not to hand over Gill to Islamabad police even when the court had approved his remand in police custody. They had been defying court orders, the PML-N leader added.

Coming back to the action taken against PML-N lawmakers, he said a case should have actually been registered for the beating and torture inflicted on then-PA deputy speaker Dost Mazari during the April 16 session.

“It all started when people pulled the deputy speaker’s hair and subjected him to violence. Are you ready to get arrested?” he questioned, addressing Elahi.