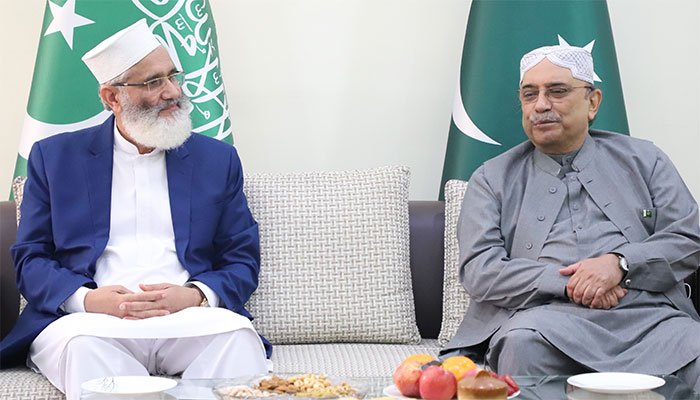 Continuation of govt policies would bring further disaster to all the sectors: Sirajul Haq, Asif Zardari Masses are badly affected & disturbed due to skyrocketing inflation & unemployment as PTI govt’s incompetence

Continuation of govt policies would bring further disaster to all the sectors: Sirajul Haq, Asif Zardari

Jamaat-e-Islami Pakistan Emir Sirajul Haq and Pakistan People’s Party Co-Chairman Asif Ali Zardari have agreed that the masses are badly affected and disturbed due to skyrocketing inflation and unemployment as the PTI government’s incompetence and ill-conceived policies pushed the country towards economic and constitutional crises.

During a meeting between them at Mansoorah on Thursday, they also agreed that the continuation of the government policies would bring further disaster to all the sectors.

The leaders of both the parties said the government instead of focusing on institution building and providing relief to the masses targeted the opposition parties. They believed the country could not move forward without the establishment of rule of law and strengthening democratic values.

Liaqat Baloch and Raja Parvez Ashraf briefed the media after the meeting and said the contacts among the political parties were welcoming sign.

Liaqat Baloch said the PPP had sought support of the JI for the major opposition parties proposed no-trust motion against the prime minister. He added the JI will discuss it in its Majlise Shura meeting scheduled to be start on Friday. The JI, he said, will decide on the issue after consultation, adding bringing no-confidence was the constitutional right of the opposition parties. He said the PTI government failed to provide any relief to the masses. The government policies, he said, created constitutional and economic crises in the country. He said Sirajul Haq conveyed to the PPP leadership that the JI would not support any extra constitutional move and believed on the supremacy of the constitution. He said the contacts among the political parties were vital to strengthen the democracy.

Raja Parvez Ashraf said the PPP had sought support of the JI for its long-march and no-trust move against the prime minister. He said the opposition parties will send the incompetent government home.