Imran Khan inaugurates trial operation of much-awaited Green Line project in Karachi Karachi is Pakistan's engine of growth. If Karachi is prosperous, then Pakistan will become prosperous too

Karachi is Pakistan’s engine of growth. If Karachi is prosperous, then Pakistan will become prosperous too.

The prime minister lamented that several governments came and went, but “no one paid attention” to Karachi’s transportation system.

Calling Bilawal Bhutto-Zardari an “innocent child”, the minister said the PPP chairman had asked for “time” to work for Sindh.

Prime Minister Imran Khan has inaugurated the trial operation of the much-awaited Green Line Bus Service project on Friday during his one-day visit to Karachi.

The inauguration was held at the main station of the Green Line project at Numaish Chowrangi. He inaugurated the first phase of the hybrid bus project under the Karachi Transformation Plan.

The premier went on to say that there’s a city like this in every country — London runs the United Kingdom, New York has a major impact on the United States, Paris has an impact on France. “So just like this, if we are helping Karachi to prosper, it means that we are helping Pakistan […] building a transportation system is the first step towards building a modern city,” he said. 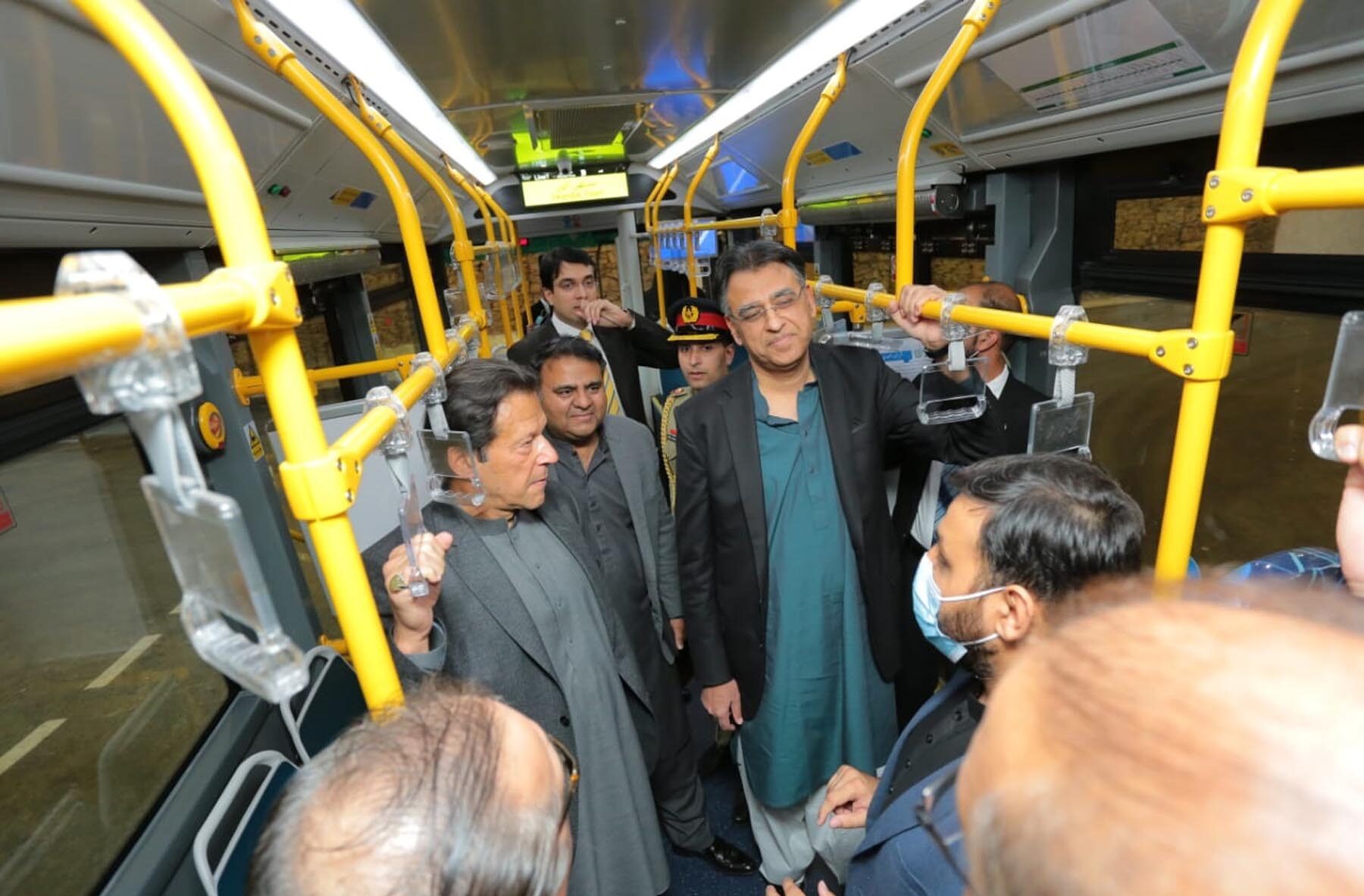 The prime minister lamented that several governments came and went, but “no one paid attention” to Karachi’s transportation system.

Citing the example of some of the most developed cities of the world, the premier said that those cities were able to progress because they had modern management.

“Until and unless we focus on the management of Karachi, it cannot turn into a modern city,” he said. “Karachi, according to my estimate, does not even generate $30 million in revenue. It is important to give autonomy to Karachi, just like Tehran, London, and New York,” he said.

Quoting the example of the Iranian capital, he said even though the country was under US sanctions, Tehran had modern facilities because of its efficient management. “Tehran collects $500 million [in revenue] and spends it through planning. In comparison, Karachi doesn’t even collect $30m,” he noted, stressing the need to give Karachi autonomy for the local government system to succeed.

Prime Minister Imran Khan said there was a need to get the mayor directly elected in Karachi and PTI was about to do it in Peshawar, Islamabad, and Lahore.

While shedding light on environmental issues, he said due to the growing population, Karachi has become a very polluted city, therefore, measures must be taken to address the problem.

Moving on to the Karachi Transformation Plan, the prime minister said he was “happy” to know the PTI government was living up to its development-related promises and work is underway. 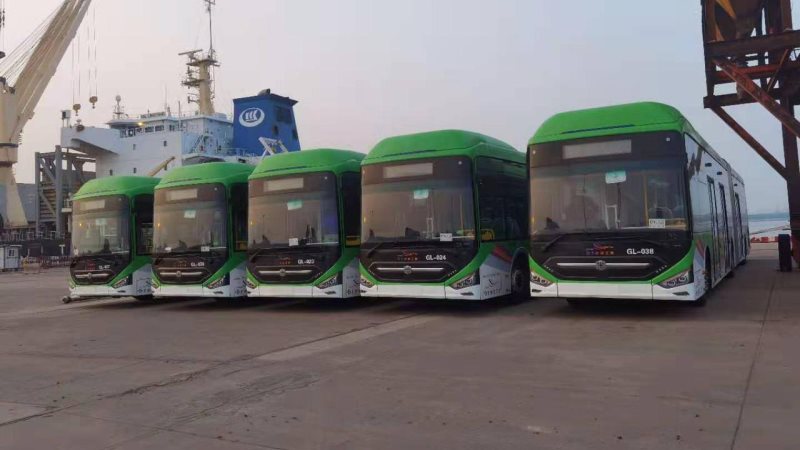 “The cleaning of nullahs, the works on the freight corridor are underway, but I am particularly happy about one project — K-4 — in which I am personally involved and take regular updates from WAPDA chairman,” he said.

Prime Minister Imran Khan said during the next month, the groundbreaking ceremony of the K-IV Project would be performed, and in the next 14-15 months, it will be completed. “In 2023, we will be able to provide water to Karachi from Kenjhar Lake in August or September,” the prime minister said.

PM Imran Khan said that the PTI-led government had launched health cards, as when a person in a family is sick, and they can’t get that person treated, it becomes a tragedy for them.

In Khyber Pakhtunkhwa, every family has a health card; in Punjab, some districts have it, and in January or March, every family will have it there. “Balochistan, Azad Jammu and Kashmir, and Gilgit-Baltistan are all geared up to roll it out.” The prime minister told the Sindh government to partake in it and introduce it in the province, so people can benefit from it. “I would like to urge the Sindh government to cooperate with the Centre in this regard,” he said.

Earlier, Minister for Planning, Development and Special Initiatives Asad Umar thanked the SIDCL and parliamentarians from Karachi for their efforts for the project. He said the Sindh governor was “supervising” the project since the PTI came to power. In Dec 2020, he said, the SIDCL became a part of the planning ministry and the government started working on the project.

The minister recalled that the project had been approved in 2016, and while the PML-N stayed in power for the next 28 months, the project’s infrastructure was not built.

“The order for the buses was also not placed and neither was the payment system designed; the operation and maintenance tender was also not placed,” he said, adding that the PML-N only thought about building a track surrounded by grills “with no other facilities available”.

“Karachi’s rights were not given to the city in the last three of their (PML-N and PPP’s) governments,” Umar remarked. 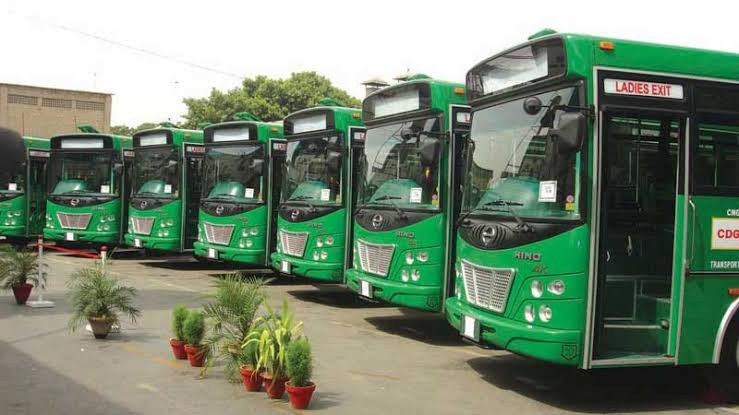 Lashing out at the PPP, Umar said the party merely used the name of Sindh, while the PTI-led government actually worked for the province.

Calling Bilawal Bhutto-Zardari an “innocent child”, the minister said the PPP chairman had asked for “time” to work for Sindh. “Dear child, 50 years ago your grandfather was made the chief martial law administrator of the president of Pakistan. How much more time do you need?”

He said the party had formed government in the province six times and four times in the Centre, but still had nothing to show for it.

Commenting on the Karachi Transformation Plan announced by the prime minister last year, he said the scheme included five major projects, one of which — the Green Line project — was being inaugurated today. “Commercial operations will begin on December 25 and total operations will start by January 10,” he announced.

He said that the second project concerned the construction of stormwater drains in the city, adding that work on the Mehmoodabad nullah had been completed and it would be inaugurated in 10 days. The minister further said 50 per cent of the work on the Gujjar and Orangi nullahs had been completed.

Umar said the federal government had also taken responsibility for the K-IV water supply project after it was abandoned, adding that the PC-1 for the project had been submitted to the planning ministry and work would begin within two months.

According to the minister, the Frontier Works Organisation had been mobilised for the Karachi Circular Railway (KCR) project and work had begun on the ground. “Not only local, but international companies are also showing interest in the project,” he revealed.

He remarked that the PTI government was making solid progress on all the projects announced under the transformation programme. “We don’t just make promises, we deliver.”

It is worth mentioning here that the Green Line Bus project was announced by the PML-N’s federal government in July 2014. On February 26, 2016, the foundation stone of the 17.8 km long track from Surjani to Guru Mandir was laid.

The Green Line bus service will comprise 80 hybrid buses that will ply a route of 22 kilometres from Surjani to the Municipal Park near Jama Cloth market with, 23 stations located on each km.

Modern state-of-the-art lifts and automatic ticketing systems will facilitate passengers on every bus station. All details about the arrival and departure of buses will be available on digital screens installed on bus stations.

Each bus will have a capacity of 200 to 250 passengers while the fare is expected to be between Rs20 and Rs50. The buses will have a complete system from USB ports to wheelchairs.

In the second phase of the project, buses will run to the Tower. Under the Green Line Bus project, a two-storey underpass is being constructed at Guru Mandir and Numaish Chowrangi, where not only buses will run on international standards, but accommodation will also be provided.

A control room with at least 900 cameras has also been set up for monitoring of the Green Line bus project and security of passengers to meet the requirements of modern times.