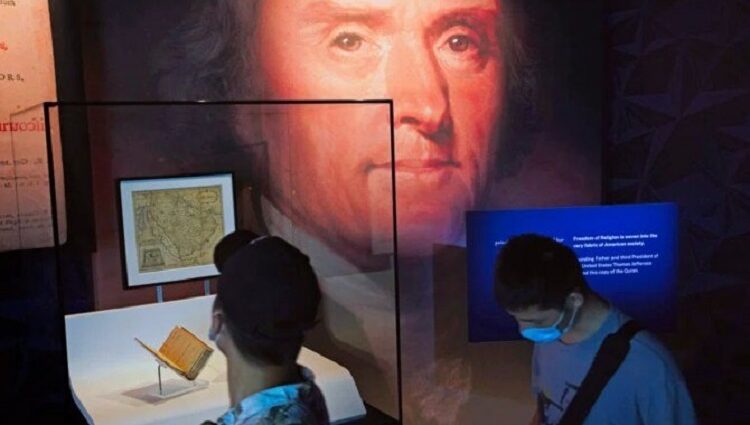 Over 225 Years Old Quran Being Displayed At Expo 2020 Dubai

In: International
Tagged: Old Quran, Over 225 Years, US President Thomas

More than 225 years old historic copy of the Quran owned by the US President Thomas Jefferson is being displayed at the US pavilion of the Expo 2020 Dubai, after leaving its home at the Library of Congress in Washington, D.C. for the first time.

The US President Thomas Jefferson was elected twice as President from 1801-1809 and it is believed that he got this copy of holy Quran when he was young and studying law. In other words, the copy of Quran, now at display at the Expo-2020, is more or less 225 years old.

“It is on display in the #USAPavilion as an integral part of our theme, ‘Life, Liberty, and the Pursuit of the Future’,” the US pavilion at Expo 2020 Dubai said on its official social media account.

Jefferson was the third president of the US, and is widely credited as the principal author of the Declaration of Independence.

The Quran – a two-volume second edition English translation by George Sale in 1734 – as well as a framed map of Makkah was transferred from the Library of Congress via a custom-made wooden crate with four inches of padding and customized trays, along with a sensor that detects vibrations and temperature changes.

Conservation and security staff escorted the historical artifacts on their way to the global event in Dubai.

It is believed that Jefferson, who was US president for two terms from 1801-1809, acquired the copy of the Quran while he was a young man studying law. The two-volume set was printed in London and has never previously traveled outside the US since its arrival in then Colonial America.

Post Views: 242
2021-10-11
Previous Post: Oman wanted to boost bilateral trade and economic relations with Pakistan
Next Post: Rs. 4 billion to PSEB for disbursement of cash reward incentive in order to incentivize IT exports