Oman wanted to boost bilateral trade and economic relations with Pakistan as both countries enjoyed strong political and defense relations, but their trade relations were not reflective of the true potential of both countries. This was stated by H.E. Al-Sheikh Mohammed Al-Marhoon, Ambassador of the Sultanate of Oman while interacting with the business community during his visit to the Islamabad Chamber of Commerce & Industry.

The envoy said that Pakistani high quality products have great prospects to penetrate Oman’s market and added that chambers of commerce of both countries should play a role to ensure bilateral trade of quality products between them. He said that many Pakistani products were getting labelled in third countries for export at higher prices and urged that Pakistan should ensure direct export of its products by focusing on their branding that would achieve better results for its economy. He said that peace in Afghanistan would create many new opportunities of trade promotion between Central Asian region and Arab countries through Gwadar and Salalah ports, which would also strengthen trade cooperation between Pakistan and Oman.  He also invited Pakistani investors to explore JVs and investments in Salalah Free Zone which offered great incentives including 30-year tax holiday, zero VAT, customs duties exemptions, 100% foreign ownership, only 20% Oman’s requirement, one stop shop services and no minimum capital requirement. He assured that his Embassy would cooperate in enhancing Pakistan’s exports to Oman. 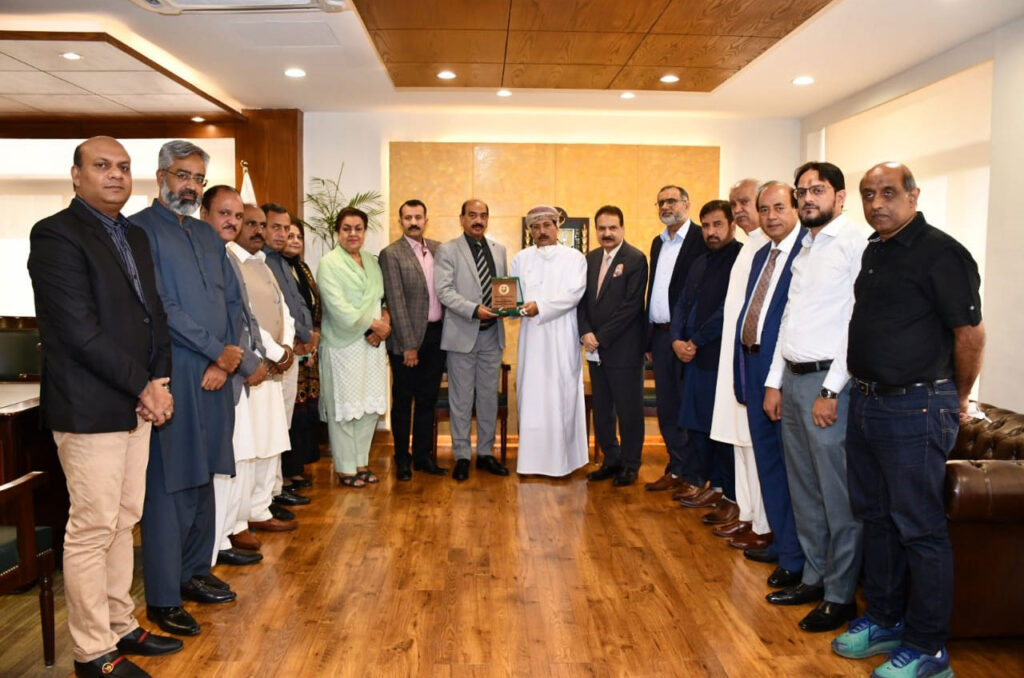 Jamshaid Akhtar Sheikh, Senior Vice President ICCI highlighted trade, tourism, oil & gas exploration, ports, agriculture, construction and healthcare, education as potential areas of mutual cooperation between the two countries. He said that both countries should encourage frequent exchange of trade delegations and focus on developing strong business linkages between their private sectors to explore all untapped areas of mutual cooperation. The Ambassador supported this proposal and said that exchange of trade missions was very important to improve trade relations between our two countries.

Mian Akram Farid, Chairman, Founder Group said that Gwadar and Salalah Ports have great potential to create efficient communication channels between the two countries as both ports possessed excellent infrastructure and other facilities. It would also promote cooperation in blue economies between the two countries. He said that Pakistan was preferring Islamic countries to explore business prospects in CPEC and invited Oman’s investor to explore JVs and investment in this mega development project.