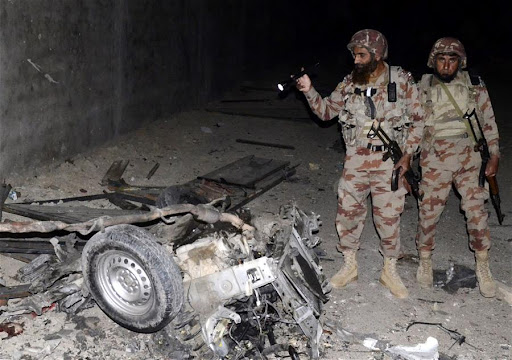 Security Forces conducted Intelligence Based Operation (IBO) in South Waziristan District on reported presence of a Terrorists’ concentration, present inside a hide out.

According to a statement issued by ISPR on Tuesday, security forces cordoned the hide out. During intense exchange of fire, 10 terrorists including 4 terrorist commanders were killed. Weapons and large quantity of ammunition was also recovered from the hideout.

All the killed terrorists remained actively involved in planting IEDs, conducting fire raids and target killing of innocent civilians. These terrorists were planning to conduct more acts of terrorism inside South Waziristan District. According to the ISPR, Pakistan Army is determined to root out the menace of terrorism from country at all costs.

Meanwhile terrorists targeted a Frontier Corps border post from Iranian territory with Small Arms fire in general area Chukab, Balochistan. Due to fire, Sepoy Maqbool Shah of Frontier Corps embraced shahadat while another soldier was injured. Iranian authorities concerned have been informed about the incident.