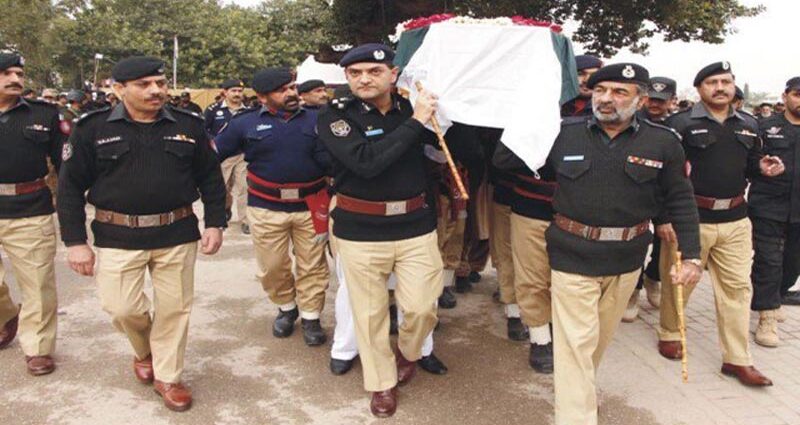 A senior police officer and two of his guards lost their lives giving chase to militants who staged a late-night attack on a police station on the outskirts of Peshawar, a senior official said on Saturday.

Senior Superintendent Police Operations Peshawar Kashif Abbasi told media that Deputy Superintendent Police Sardar Hussain and his two police guards lost their lives in an exchange fire with terrorists in the Badhabir area. The two martyred policemen were identified as Irshad and Jehanzeb. Abbasi told reporters that the terrorists attacked Sarband police station at about midnight. Sarband is located near the Bara area of Khyber tribal district.

“It was coordinated from multiple directions and the [terrorists] used multiple weapons. They lobbed hand grenades and resorted to sniper shots and automatic guns,” he said. The Peshawar police successfully repelled the attack, he added.

Abbasi said the slain police officer chased the fleeing terrorists and tried to encircle them but during an ensuing exchange of fire, he and two other policemen lost their lives. The gunmen then took advantage of the darkness and fled.

Police said a search operation was launched in Sarband and nearby areas following the attack. It resumed on Saturday morning. No arrest was made so far.

Abbasi said the gunmen had come from the Khyber Tribal district bordering Afghanistan. 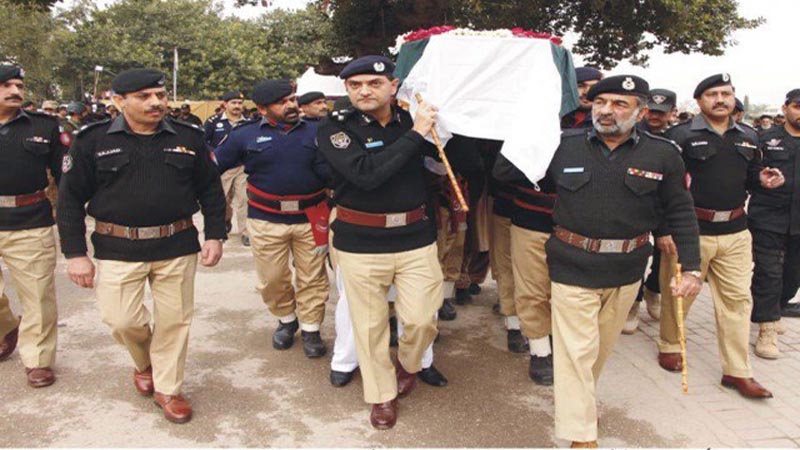 A funeral was held for the martyred police officials at Malik Saad Shaheed Police Line in Peshawar on Saturday morning. It was attended by senior police and military officials while the police force offered a salute to the martyrs.

Meanwhile, Interior Minister Rana Sanaullah Khan said that the federal government was “seriously concerned” over the “worsening law and order situation” in KP.

Highlighting “terrorists are attacking police stations [and] policemen and officers are being targeted”, he criticised the KP government for “not learning a lesson” from the attack at a Counter Terrorism Department centre in Bannu last month where law enforcers were held hostage by militants.

He asked, “The KP police are not safe from terrorist attacks; what will be the [state of] people’s protection?” The minister paid tribute to the martyred police officials and saluted their sacrifices.

Khyber Pakhtunkhwa Inspector General of Police Moazzam Jah Ansari commended the police for repulsing the terrorist attack with “great bravery” and asserted “we all are together in this battle”.

Talking to the media in Peshawar on Saturday, he highlighted that this was the first time the police had used thermal weapon sights in Peshawar — a sighting device that helps locate and see targets from afar.

Ansari said, “We did not have a way to see the terrorists [in obscure conditions].” He said the provincial government has released funds for the provision of thermal weapon sights, adding that 40 have already been received — half of which have been sent to Dera Ismail Khan and the rest to Bannu.

“Thermal [weapon] sights are mounted on top of weapons. Thermal guns enable [us] to see [clearly] from afar.”

Ansari also said there was “great progress on Safe Cities” project. “We have signed an agreement for Safe Cities [project]. Phase one would be completed by June this year.”

He further added that security cameras have been installed at the police stations on their own initiative.

Meanwhile Provincial Chief Minister Mahmood Khan has condemned the terrorist attack on the Sarband Police Station and termed it a tragic incident.

In a statement, CM Mahmood Khan said that “the sacrifice of the martyrs will not go in vain”, adding that the police fought with bravery and repulsed the attack.

Further, he said that the whole nation is standing shoulder-to-shoulder with the police in the war against terrorism. He prayed for the eternal peace of the martyrs and expressed his heartiest sympathies and condolence with the bereaved families.

Mahmood Khan has also asked the IG Police for a report on the incident.