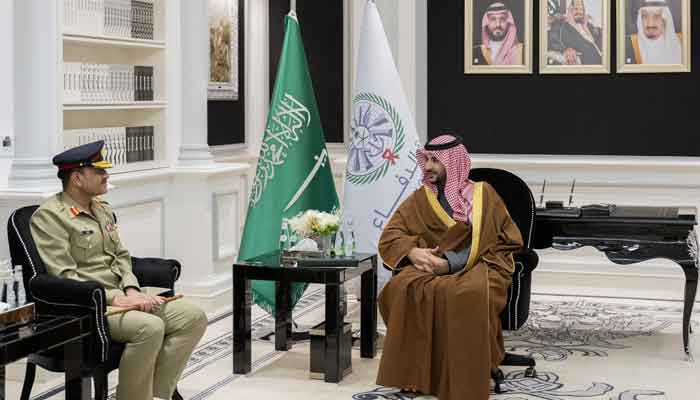 Chief of Army Staff (COAS) General Hafiz Syed Asim Munir Ahmed Shah has arrived in Saudi Arabia on his first official visit to a foreign country since assuming the command of Pakistan Army.

According to the “Saudi Press Agency” (SPA), Prince Khalid bin Salman bin Abdulaziz, Minister of Defense of the Kingdom of Saudi Arabia received the Chief of Army Staff of Pakistan, General Syed Asim Munir, currently on a visit to the kingdom.

At the outset of the meeting, the Minister of Defense congratulated General Syed Asim Munir on his appointment as the new Chief of Staff of Pakistani Army.

During the meeting, they emphasized the strength and durability of bilateral relations between the two fraternal countries, and discussed military and defense cooperation, and ways to support and enhance them, in addition to discussing the most important regional and international issues of common interest.

The meeting was attended by the Chief of General Staff of the Kingdom of Saudi Arabia, Lieutenant-General Fayyad bin Hamed Al-Ruwaili; Assistant Minister of Defense Eng. Talal bin Abdullah Al-Otaibi, and a number of Saudi and Pakistani military and civilian officials.

Meanwhile, in a tweet on Thursday, Prince Khalid bin Salman said he was pleased to meet Pakistan’s army chief.

The kingdom’s minister in a tweet said, “We emphasized the strategic partnership between our brotherly countries, reviewed the bilateral military and defense relations, and discussed ways of strengthening our cooperation”.

Meanwhile according to a statement issued by ISPR on Thursday, General Syed Asim Munir, Chief of Army Staff (COAS) is on an official visit to KSA and UAE from 4th to 10th January. COAS will be meeting the senior leadership of both brotherly countries to discuss matters of mutual interest, military to military cooperation and bilateral relations focusing on security related subjects.