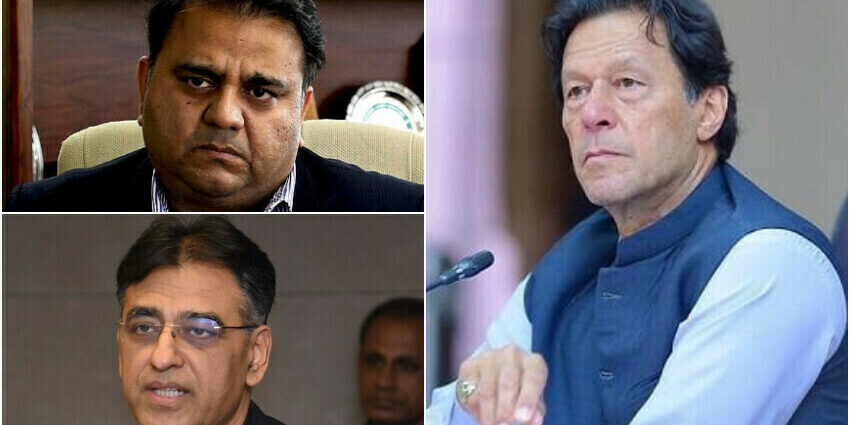 Imran Kahn, Asad Umar, Fawad Chaudhry given last chance to appear before ECP ECP Member Sindh Nisar Ahmed Durrani warned of issuing arrest warrants for them if they failed to show up in the next hearing.

The Election Commission of Pakistan (ECP) on Tuesday gave a last chance to the former prime minister and Chairman Pakistan Tehreek-e-Insaf Imran Khan and other leaders including Secretary General PTI Asad Umar and Vice President PTI Fawad Chaudhry to appear in a contempt case against them otherwise arrest warrants would be issued against them.

ECP Member Sindh Nisar Ahmed Durrani warned of issuing arrest warrants for them if they failed to show up in the next hearing. The ECP has asked the Pakistan Tehreek-e-Insaf (PTI) Chairman Imran Khan, Asad Umar and Fawad Chaudhry to submit their reply to the show-cause notices till Jan 17.

During the hearing, Member ECP KP Justice (retd) Ikramullah Khan remarked why should not ECP issue the arrest warrants for the PTI leaders. To which, Imran Khan’s lawyer Syed Muhammad Ali Bokhari asked the ECP to issue notice instead of warrants.

Bokhari told ECP that Imran Khan was unable to appear before the ECP due to his health condition, adding that Fawad Chaudhry sought exemption from appearance as his mother was hospitalised. He further said PTI leader Asad Umar could not appear before the Commission ash he missed his flight.

The case was initiated against the PTI chairman and its leaders for controversial remarks against the ECP.

ECP’s KPK Member Justice (retd) Ikramullah Khan said if they did not appear on the next hearing then warrants would be issued against them and continued they would give orders on the matter of issuing warrants.