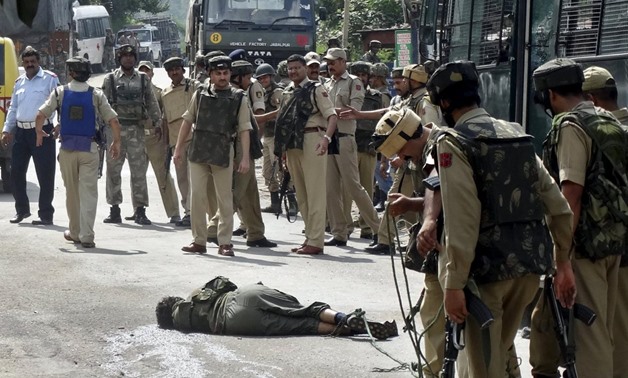 The Legal Forum for Kashmir (LFK) has issued the Annual Human Rights Review – Indian occupied Kashmir,2022 report on Saturday. The report is regarding the human rights situation in Indian Occupied Jammu and Kashmir (IOJK).

This annual report was prepared by Legal Forum for Kashmir (LFK) and delineates the situation of human rights in Indian Occupied Jammu and Kashmir (IOJK). It covers the time period from January to December 2022. Like previous years, 2022 again witnessed bloodshed of Kashmiris and silencing of Kashmir’s civil society, arbitrary arrest of human rights defenders, journalists and religious clergy. The unparalleled censorship and blackout on all forms of media coverage about the ongoing situation in the war-trampled region has made it more vulnerable for human rights organizations and media to work freely. This reportage and review is also not bereft of predicament. Data collection and surveying was done in utmost convoluted manner as the threat of persecution loomed for our volunteers on ground.

According to the LFK report, India intensified its military density in Kashmir- deploying and mobilizing aggressively 900,000 forces. In addition to this India has engaged more than 130,000 police personnel in anti-resistance operations and created more counterinsurgent agencies like SIA and SIU .The year witnessed the casualty of 24Indian armed forces and the killings of 181 freedom fighters besides the extrajudicial killing of 45 civilians. Indian troops launched 200 Cordon and search operations (CASOs) and Cordon and Destroy Operations (CADOs).

According to the LFK report, in January 2022, thousands of acres of land in Gulmarg and Sonamarg area of Occupied Kashmir were declared as ‘strategic areas’ and given to Indian military. This is a brazen violation of International Law governing the disputed nature of Occupied Jammu and Kashmir. The excessive use of force and impunity enjoyed by Indian forces in IOJK has increased the “Atrocity Crimes” manifold. There have been numerous cases of extrajudicial/custodial killings and denial of burial rites to the family members of civilians and rebels alike. Altaf Ahmad Shah, a prominent pro-freedom leader from Indian Occupied Kashmir died in the Indian custody while fighting renal cancer. Shah, 66, was being held in the high-security Tihar prison in the Indian capital, New Delhi, for the past five years. Shah’s family had raised alarm about his deteriorating health condition many occasions. Kashmiri prisoners of war continue to suffer in various Indian jails and torture centers. On multiple occasions Indian state agencies have taken prisoners out and killed them in military operations. Torture and Sexual violence continues to be used as a weapon of choice. Resistance and dissent have been criminalized as Indian state continues to use masquerading language and cloaked terminology to hoodwink international community.

According to the report, the Indian authorities in Occupied Jammu and Kashmir have terminated services of at least40 employees, citing their affinity to resistance ideology. This social, cultural, economic and political disempowerment is carried to infuse fear among Kashmiri populace and create coercive disciplining. GOIis recruiting retired security personnel from all over India for civilian posts in OJK. Religious freedom remains curtailed for the Muslim majority region. It has been 198 weeks in the last six-years that Kashmir’s largest mosque, Jamia Masjid remains locked down. Dozens of Imams and preachers were routinely harassed, while many of them were booked under draconian laws like UAPA and PSA. Massive administrative and legislative changes arming and aiding the Indian settler colonial project saw massive land grabs by Indian defense and Hindu right-wing capitalists paving way for demographic change.

According to the LFK report, in a bid to disempower native Muslim population, India extended voting rights to all the Indian citizens living temporarily in Occupied Jammu and Kashmir. These arbitrary orders tantamount to changing the demography of Occupied Kashmir and implemented coercively and incessantly.