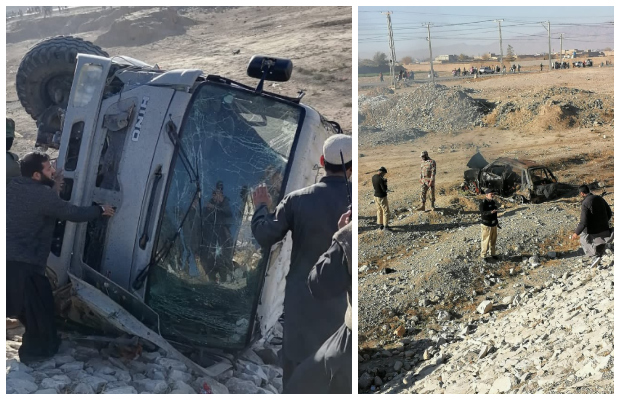 At least four people including a woman and a police cop were killed and 28 others, including 20 cops, injured in a suicide blast near a Balochistan Constabulary truck in Baleli area of Quetta on Wednesday, witnesses and police said.

Police said the explosion left a police truck and two other vehicles damaged. The injured were transported to the hospitals. A state of emergency was declared in Quetta hospitals.

Quetta Deputy Inspector General of Police (DIGP) Ghulam Azfar Mahesar said up to 25kg explosives were used in the blast. He said policemen were riding the truck to join their duty. The officer said the police movement on roads would be secured in more effective way.

The officer said the injured were being treated at Civil Hospital Quetta, adding the policemen were being transported to deploy with the polio teams at the time of the incident.

Ghulam Azfar Mahesar told reporters at the site of the attack that the explosion took place near a police truck which was on its way to provide security to polio workers. “Due to the impact [of the blast], the vehicle toppled and fell into a ditch,” he stated.

The official said that a total of three vehicles were hit in the blast — the police truck, a Suzuki Mehran and a Toyota Corolla. “Looking at the crime scene and given that the truck toppled, it is estimated that 25 kilogrammes of explosives were used [in the blast].”

Mahesar added that the wounded have been moved to the Civil Hospital Quetta.

The official later told a foreign news agency that the deceased civilians included a child and a woman.

The media coordinator for the Balochistan Health Department, Dr. Waseem Baig, confirmed the number of fatalities.

Speaking to a private TV channel, Dr. Baig said 27 others, including 20 policemen and four civilians, were injured in the attack.

Earlier, Quetta Senior Superintendent of Police (Operations) Abdul Haq Umrani told a private TV channel that the blast site had been cordoned off and an investigation had begun.

Inspector General Balochistan Abdul Khaliq Sheikh said that the “terrorists launched a cowardly attack on the police force”. He said that such attacks will not lower the police’s morale. “Protecting people’s lives and property is our job. Our morale high and our determination is strong,” the IGP said.

Meanwhile President Dr. Arif Alvi and Prime Minister Mian Muhammad Shehbaz Sharif on Wednesday strongly condemned the suicide attack at a police van deputed on the security of an anti-polio team and said such nefarious designs would not be allowed to harm the country’s commitment to eliminate the disease.

In their separate statements on the terrorist incident in Quetta’s Baleli area, the President and the Prime Minister expressed their resolve to continue efforts till the complete end of polio.

In a statement issued by the Aiwan-e-Sadr, President Dr. Arif Alvi condemned the attack and extended condolences to the bereaved families. He said that children were Pakistan’s most valuable asset and the government was determined to protect them from diseases such as polio. “The State will not allow anti-social elements to interfere in the mission of complete eradication of polio,” he promised. The president also paid tribute to the policemen and health officials working for the eradication of polio.

President Dr. Arif Alvi paid tribute to the efforts of health workers and police personnel for saving the children of the country from the crippling disease. He prayed for the forgiveness of the souls of the deceased and for the early recovery of the wounded.

Prime Minister Shehbaz Sharif strongly condemned the incident and directed authorities to initiate an investigation into the attack. The premier expressed grief and sorrow over the loss of life and prayed for the speedy recovery of the wounded.

He also said that polio workers across the country were fulfilling their responsibilities without caring about their lives. For this, he said, Pakistan pays tribute to their services.

Meanwhile Balochistan Chief Minister Mir Abdul Quddus Bizenjo instructed authorities to provide the injured persons best treatment facilities. He also promised that such “cowardly acts” would not dampen Balochistan’s determination to establish peace. “All the elements involved in the incident will be brought under the grip of the law,” Bizenjo added.

Meanwhile, Interior Minister Rana Sanaullah Khan said that the “terrorist” attack was targeted at police officers, adding that a detailed report of the incident has been summoned by authorities in Balochistan.

Former premier and Pakistan Tehreek-e-Insaf Chairman Imran Khan also expressed deep grief on the attack and prayed for the speedy recovery of the injured people.

PTI leader and former federal minister Asad Umar said that the Quetta blast was a reminder that the “brave sons of this nation are always ready to sacrifice their lives for our safety”. “May God raise the ranks of the martyrs and heal the injured,” he added.

Post Views: 48
2022-12-01
Previous Post: LG polls to be held in Punjab in the last week of April 2023: ECP
Next Post: Opposition in Punjab would continue to face defeat in the future as well. Pervez Elahi