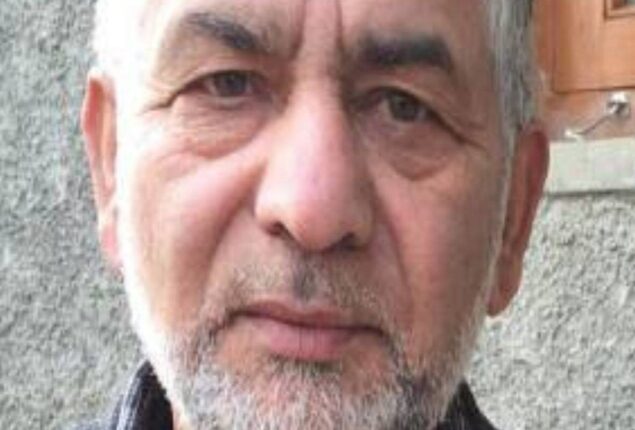 “Altaf Ahmad Shah, one of the senior leaders of the ongoing freedom movement, languishing in Tihar Jail New Delhi for the last 5 years, has left the world without proper and timely treatment to his renal cancer disease by the Indian authorities, causing sad and soulful situation in Kashmir” states Muhammad Farooq Rehmani.

The Chairman of the Jammu and Kashmir People’s Freedom League and ex-Convener of the All Parties Hurriyat Conference Muhammad Farooq Rehmani expressed profound grief and gloom over the custodial demise of Altaf Shah whom the Delhi authorities failed to give proper treatment, even after diagnosis of his cancer, nor he was released from his illegal custody, simply because of his being son- in- law of Syed Ali Gilani Shaheed.

Muhammad Farooq Rehmani denounced Delhi regime’s revengeful and prejudiced behaviour against the incarcerated Kashmiri leader, which took life of a senior Kashmiri leader, and have also threatened other Kashmiri leaders in Indian jails. He sent a message of Condolences to the martyred leader’s family and called upon the UN Secretary General to take cognizance of the pitiable human rights condition of the Kashmiri detainees in jails, urge the Indian rulers to release them and initiate steps to probe the circumstances in which Altaf Ahmad Shah died under custody of the Indian authorities and embraced martyrdom. Muhammad Farooq Rehmani paid rich tributes to the departed leaders services and sacrifices to the Kashmir cause and prayed to Allah for his here-after blessings.

Calling it “sheer act of deliberate custodial killing for which sole responsibility lies on the Modi-led fascist regime,” Saghar said it is “ruthless behavior and barbaric attitude of Indian imperialism towards the freedom loving leaders kept in solitude in various jails of India.”

These Kashmiri leaders, who are face of resistance movement against India’s illegal military occupation of Kashmir, are being denied medical facilities and other basic amenities in jails, said Saghar.

Paying homage to Altaf Ahmed Shah, who is also son-in-law of Shaheed Syed Ali Geelani, the APHC AJK convener said that slain Shah is “great hero of Kashmiri nation who devoted his whole life for the sacred cause of freedom from India.” “Fascist Modi regime is hell bent to eliminate leadership of Kashmiri freedom movement,” Saghar said.

While Geelani breathed his last at home last year where he was under illegal custody by Indian forces, Sehrai was killed in a jail in Jammu. Bhat, 65, a former member of the banned religious-political organization Jama’at-e-Islami, became the first political prisoner to die in an Indian prison after Aug 5, 2019, when India re-annexed Kashmir.

APHC leader Yasmeen Raja in Srinagar has expressed shock and anguish over the custodial killing of Altaf Ahmed Shah said that it is a case of target killing and a brutal act. She said that Modi regime is hell bent on eliminating freedom leadership under a deep-rooted conspiracy. She said that death of Hurriyat leaders in custody is the only way of salvation form Indian inflictions. She appealed to the Secretary General of the United Nations to increase pressure on India for the immediate release of Kashmiri detainees.

Meanwhile terming Illegally detained senior leader of All Parties Hurriyat Conference, Altaf Ahmad Shah’s death as a clear case of custodial killing, the APHC leader Altaf Hussain Wani has said that the Indian authorities, who have willfully ignored his deteriorated health condition in jail and denied him the right to medical treatment in time, were responsible for the tragic death of the Hurriyat leader

Paying rich tributes to Altaf Ahmad Shah for his sacrifices and contribution in the ongoing freedom struggle, Wani said that Shah has been on the forefront of resistance for the past several decades. Shah, he said was strong proponent of Kashmiris’ right to self-determination. “His life long struggle for the Kashmir cause would be remembered for a long time in the annals of Kashmir history”, he said adding that Shah have had the privilege to work closely with Syed Ali Geelani, who has been his mentor and trusted guide.