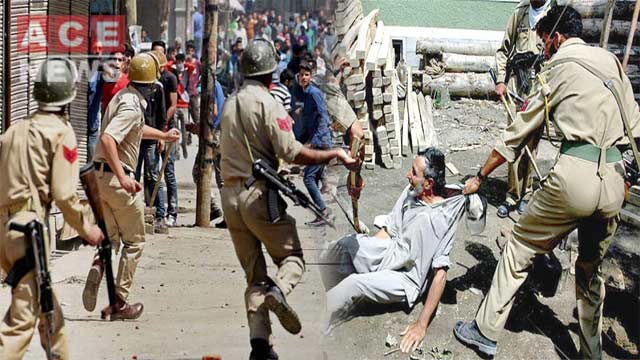 Indian troops martyred five more Kahsmiri youth in IIOJK The troops shot at and injured a civilian, Asif Ahmad, at a check-point in Haal area of Pulwama district.

During cordon and search operations, the troops martyred three youth in Drach and one in Moolu areas of Shopian district. The troops continued their operations at both the places till last reports came in.

The troops shot at and injured a civilian, Asif Ahmad, at a check-point in Haal area of Pulwama district. Later, the victim succumbed to his injuries at SMHS hospital in Srinagar.

The killing of innocent youth by the troops belies the claims made by the Indian Home Minister, Amit Shah, at a rally in Rajouri district of Jammu region,  here on the other day, that after the repeal of Article 370, IIOJK has emerged as the most secure place.

Since repeal of Article 370, killings, arrests, torture, destruction of properties and other brutalities by Indian troops have become the order of the day. The troops have intensified their cordon and search operations across IIOJK, making the life of the people a hell.

The youth identified as Aasif Ahmad Padroo was martyred when an Indian policeman opened fire on him in the district. The killing of youth comes on a day when Indian Home Minister Amit Shah was in Kashmir.

Mehbooba Mufti while condemning the killing in a tweet said, “As if the harsh measures put in place causing grave inconvenience to the people in Kashmir weren’t enough, Asif from Pulwama paid with his life in the name of ensuring security for Amit Shah’s visit. My heart goes out to his family”.

Meanwhile National Conference Vice-President Omar Abdullah while condemning the killing said, “The killing of an unarmed civilian is highly condemnable. There must be a swift, credible and transparent probe into the death. Those responsible must be punished to the fullest extent possible”.