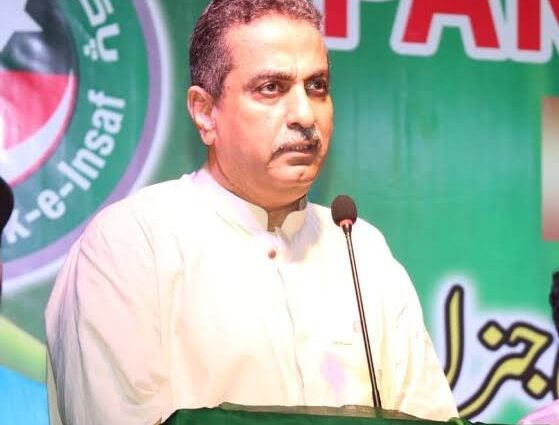 The Pakistan Tehreek-e-Insaf (PTI) on Saturday suspended the party membership of lawmaker Abdul Shakoor Shad and issued him a show-cause notice for filing a petition in the Islamabad High Court (IHC), stating that he had never resigned as an MNA and for speaking against the party.

The show-cause notice issued by the party’s Sindh chapter, said that Abdul Shakoor Shad had stated “countless times, both verbally and in writing”, that he had resigned but he “suddenly went against the party policy” and filed in a petition in the IHC contradicting his statements.

The notice also said that Abdul Shakoor Shad had spoken against the party on “various occasions”.

It directed the MNA to submit his response within seven days, adding that till that time, Shad’s basic party membership was suspended and he ceased to hold any party office or position.

On April 11, PTI lawmakers had resigned en masse two days after former prime minister Imran Khan was ousted from the top office after the no-confidence motion moved by the joint opposition in the parliament against him succeeded.

Subsequently, NA Speaker Raja Pervaiz Ashraf had accepted the resignations of 11 lawmakers, including Shad, on July 28. The Election Commission of Pakistan (ECP) had later issued a notification in this regard.

Shad then approached the IHC, which reinstated him as an MNA on Friday and set aside the ECP’s de-notification order.

Shad contended that he neither sent his resignation to the speaker nor mentioned his name and date on it.

He said the resignations of 123 PTI MNAs were written by the computer operator of the party head office. However, the members signed the document to maintain the party discipline.

The acceptance of his resignation was a violation of court orders, claimed the petitioner.

However, the show-cause notice issued to Shad on Saturday said that the lawmaker had submitted a handwritten resignation letter and posted the same on his Twitter account. It said that Shad’s Twitter bio also stated that he was an “ex-MNA”.

The notice further stated that Shad had filed nomination papers at the ECP and appeared for scrutiny as a covering candidate for Chairman Imran in the by-election announced for NA-246 — the seat vacated after the NA speaker accepted his resignation.

“Despite strict party instructions not to withdraw [his] candidature, [he] withdrew his papers after acceptance of the party chairman’s papers.”

Referring to the petition Shad filed in the IHC and his media statements, the notice stated, “This is a gross misconduct and in violation of party rules and therefore, you are required to submit a reply within seven days of this notice stating why your party membership may not be cancelled.”