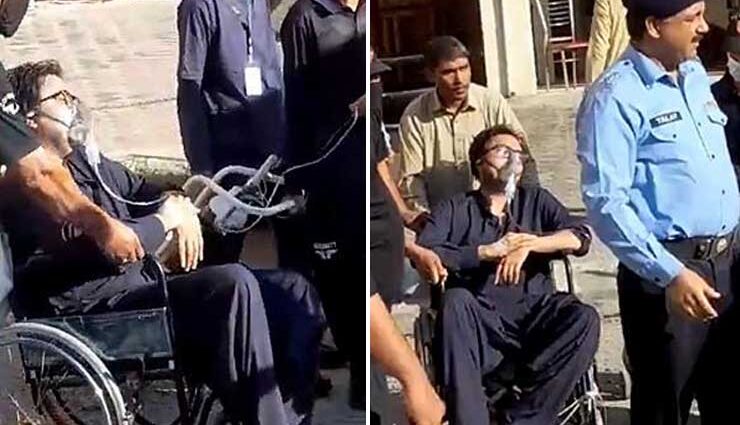 Court directs police to shift Dr. Shahbaz Shabbir Gill in PIMS till Monday The court has declared that two-day remand of Shahbaz Gill has not been even started.

Shahbaz Gill was presented before the court early morning. He was escorted by the police to court in a wheelchair from the Pakistan Institute of Medical Science (PIMS) after being deemed “fit” by a medical board. Strict security arrangements were in place outside the court.

At the outset of the hearing, Gill pleaded to the court to return his oxygen mask, complaining that it was snatched while he was being escorted to the courtroom.  “For God’s sake, give me my mask back,” he said.

At this, the judge asked him if he intends to stay, to which Gill said he will if his mask is provided to him. Later, an oxygen cylinder was also brought to the court.

During the hearing, the police special prosecutor Raja Rizwan Abbasi asked the court to extend the PTI leader’s physical remand for another eight days.

The judicial magistrate noted that the court had previously granted the police two-day physical remand of Gill. “Why are you making a request for eight [more] days?” he asked. The judge also questioned whether the previous physical remand remained “uninitiated”. “Was the earlier two-day remand technically uninitiated? Were police able to investigate during the two days’ time?”

He also asked police to clarify whether they were asking for a new remand or seeking an extension of the previous one. Prior to these queries, Gill again asked for his mask. “For God’s sake, give me my mask,” he pled. At that, the judge asked him whether he wanted to stay in the court. “Give me my mask. I will stay,” the PTI leader replied.

While presenting his arguments, Gill’s lawyer, Advocate Faisal Chaudhry, contended before the court that his client’s illness was there for it to see.

“His issue is genuine,” he said, adding that his medical report also indicated torture. “I asked doctors yesterday and they informed me.”

“You can see. [Gill] has been presented before the court in a wheelchair and along with an oxygen cylinder,” the lawyer said.

Advocate Faisal Chaudhry contested the police’s plea for Gill’s custody, saying that he believed Gill would face a “life threat” if sent on physical remand.

After reading out the Islamabad High Court’s order on Gill’s physical remand — in which the matter of Gill’s remand was referred back to the trial court — the lawyer said the prosecution had given assured that Gill would be kept in hospital till Monday.

The lawyer further argued that according to remand papers submitted by police, there were admitting that Gill’s two-day remand had been completed.

He claimed that Gill was being interrogated at the hospital as well, “as we were given permission to meet him at 9pm yesterday”.

For his part, Gill alleged that his medical report submitted to the court was fake.

“My real report is not the one which they have submitted,” he claimed, urging the court to seek his actual report.

Moreover, the police of the federal capital termed Gill’s illness “an excuse”, saying that the medical board had declared him “completely fit”.

“The accused is pretending to be sick and wants to hinder the investigations through this excuse but this cannot come in the way of law,” the Islamabad Capital Territory Police said in a statement issued on Twitter.

Citing media reports of Gill’s physical abuse in police custody, the PTI leaders had requested that the police be “prevented from taking a confession through pressurising” him.

The petition had also claimed that the “sole purpose” of keeping Gill in police custody was to “torture” him and claimed that his physical and mental condition was “not good; which is a threat to his life”.

During the proceedings on Friday, Justice Aurangzeb inquired that “when a medical report exists, then isn’t there a medical board in place?”.

“We are requesting an impartial medical board,” Babar Awan replied claiming that “the doctors who are present in the medical board are not experts in some diseases”.

“It may be any doctor but a private medical board should be formed with doctors from all four provinces,” he added.

“Would it not be better to leave this matter to the Hoe Secretary?” responded the judge.

Babar Awan in response clarified that the request was for a board consisting of “unbiased private doctors and not government doctors”. He further implored the court to “ensure the protection of Shahbaz Gill’s life and fundamental rights”.

Justice Aurangzeb then inquired how the current medical board was formed to which Awan responded by saying that it was “created under the direction of a female judge” of the lower court who had granted Gill’s remand. “I will pass an order on this,” the judge remarked.

“Even if it a case of high treason, torture or beating on specific parts is not allowed,” Awan stated.

Awan also said that the constitution and fundamental rights posit that “you cannot touch anyone whatever the case [against the accused] may be”. “A university professor is being tortured into confessing on whose request he committed the crime,” he continued.

After the arguments were completed the court announced that “Shahbaz Gill is a patient of asthma he should be tested”.