At least 30 persons killed, 53 others injured in five separate road accidents 20 people were killed and six others injured after a sleeper bus collided with an oil tanker on the M-5 Motorway

At least 30 persons killed, 53 others injured in five separate road accidents in country

At least 30 persons were killed and 53 others injured in five separate road accidents in the country on Tuesday. The accidents occurred in Multan, Sukkur, Sanghar, Naroval and Kasur.

According to details, at least 20 people were killed and six others injured after a sleeper bus collided with an oil tanker on the M-5 Motorway, also known as the Multan-Sukkur Motorway in Multan on Tuesday. The passenger bus was on its way from Lahore to Karachi.

Multan Deputy Commissioner Tahir Wattoo confirmed the incident in a statement, saying that the passenger bus, which was traveling from Lahore to Karachi, hit the oil tanker from the rear side at Jalalpur Peerwala Interchange on the motorway. A fire erupted after the collision and 20 people died on the spot, the statement added.

Later, Multan Commissioner Amir Khattak also confirmed the development in a tweet. He said the accident had taken place around 4 am.

However, a statement issued by Rescue 1122’s provincial monitoring centre in Lahore said the accident took place at 2:20 AM.

Photographs of the accident’s site shared by the commissioner showed the charred wreckage of the bus and the oil tanker.

Meanwhile, a private TV channel quoted a motorway police spokesperson as saying the tanker was carrying thousands of litres of petrol. He added that the apparent cause of the accident was the bus driver falling asleep.

Medical superintendent at Nishtar Hospital, Multan Dr. Amjad Chandio told media that four of the injured were initially shifted to the facility’s burns unit while arrangements for the 20 dead bodies were also under way at the hospital’s mortuary. 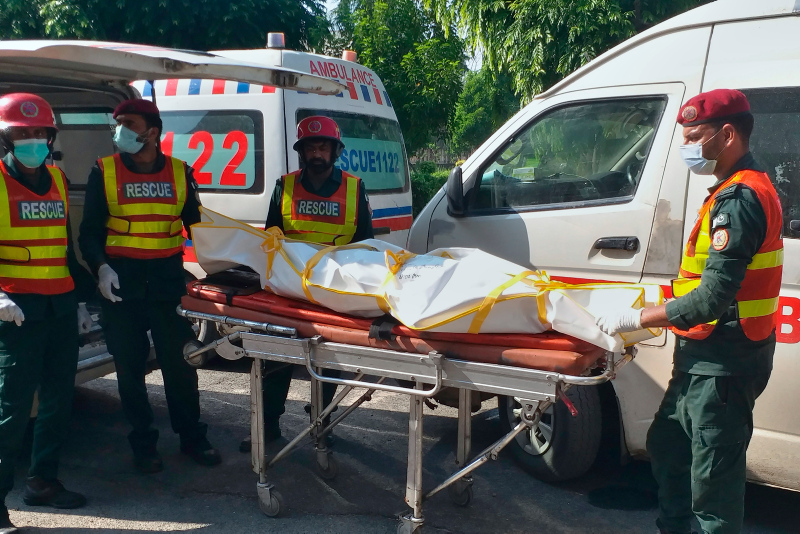 Later, DC Wattoo issued another statement, saying that the process of DNA testing was being initiated for the identification of the deceased.

The Motorway spokesperson further said that it took several hours for the rescue teams to extinguish the fire. On the instructions of IG Khalid Mahmood, the Motorway Police set up an emergency crisis centre. During the rescue operation, DIG Shahid Jawad was also on the spot. The ill-fated sleeper bus left Lahore for Karachi at 9:00 PM.

Meanwhile President Dr. Arif Alvi and Prime Minister Mian Muhammad Shehbaz Sharif have expressed deep grief and sorrow over the loss of precious lives in a traffic accident on M-5 near Jalalpur Peerwala Interchange. In their separate statements today, they prayed for the departed souls and commiserated with the bereaved families.

The President directed to provide every possible medical treatment to those injured in the accident. He said effective steps need to be taken to avert such accidents.

Prime Minister Shehbaz Sharif also expressed grief over the incident and prayed for the deceased and their families. “I am saddened by the loss of 20 precious lives in the accident. My prayers are with the bereaved families,” he tweeted.

A statement issued by the Chief Minister’s Office quoted him as saying that all aspects of the incident should be investigated and those responsible be identified.

The CM expressed grief over the lives lost in the accident and extended his condolences to the bereaved families.

He also directed the relevant authorities to provide the best possible medical treatment to the injured, the statement said.

In a separate road accident in Rohri Bypass area of Sukkur district eight passengers including four women, two children and two men were killed and 20 others injured when a passenger bus enroute to Karachi from Swat fell into deep ravine. The dead bodies and injured persons were shifted in Sukkur and Rohri hospitals. The accident occurred due to over speeding at the Rohri Interchange. Police, rangers and army personnel took part in the rescue activities.

Persons in-charge of the Edhi Centre in Sukkur, Mohammad Urs Magsi and Gul Mahar, said that four women and two children were among the deceased. They said that rescue officials rushed to the scene soon after receiving information of the accident and shifted the bodies and the injured to Rohri Taluka Hospital where an emergency had been declared. The official said the injured were in critical condition, expressing the fear that the number of casualties could increase.

On the other hand two persons were killed and two others were injured in result of collision between the two trucks in Sanghar district on Nawabshah Road in Sindh. The injured persons have been shifted in Sanghar hospital.

Meanwhile at New Lahore Road in Naroval the private college van was overturned resulting in the injury of the 11 students. The injured girl students were shifted in the district headquarters hospital Naroval. The accident occurred due to developing technical fault in the van. All the injured students were discharged after providing them the first aid.

On the other hand 15 students were injured when a rickshaw was overturned in Khuddian Khas area of district Kasur on Tuesday. The accident occurred in Siddiqa Colony due to an open manhole. The injured students have been shifted in the hospital for treatment.