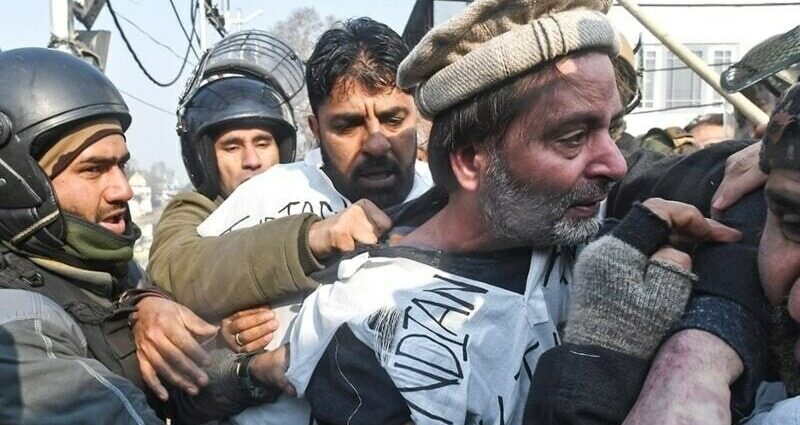 In Indian illegally occupied Jammu and Kashmir, the Jammu and Kashmir Muslim League (JKML), a constituent of All Parties Hurriyat Conference, has condemned the inhuman treatment meted out by Indian authorities to illegally detained Kashmiri leaders languishing in different jails of the territory and India.

The JKML in a meeting in Srinagar presided over by its Acting Chairman, Abdul Ahad Parra, discussed the prevailing situation of the territory. The meeting was attended among others by Farooq Ahmad Tawheedi, Feroz Ahmad Khan and Bashir Ahmad Butt.

The participants expressed serious concern over the health of illegally detained Kashmiri leader, Muhammad Yasin Malik, who was admitted to a hospital after his condition deteriorating at New Delhi’s infamous Tihar Jail. Yasin Malik’s health declined when he was observing hunger strike in the jail against the denial of fair trial in the false cases registered against him.

Abdul Ahad on the occasion said that Yasin Malik was already suffering from various ailments and continued unlawful detention had taken a heavy toll on his health.

He has been shifted to a Delhi hospital after his health deteriorated while being on indefinite hunger strike in Delhi’s Tihar Jail.

Mirwaiz who is under house detention since Aug 2019 in a statement in Srinagar said the political prisoners of occupied Kashmir are being subjected to revenge for their political beliefs and all norms of judicial justice and redressal to them ignored.

The statement said that the peoples’ leadership of Jammu and Kashmir is either detained in houses or imprisoned in jails, which is not only very unfortunate but also illegal.

The senior APHC leader said that repression on the basis of political ideologies and claims of establishing peace through detentions, bans, censorship, sanctions and repressive measures can neither change the facts nor sentiments; ultimately dialogue and negotiation between all parties is the only way to resolve the long-standing Kashmir issue on a permanent basis.