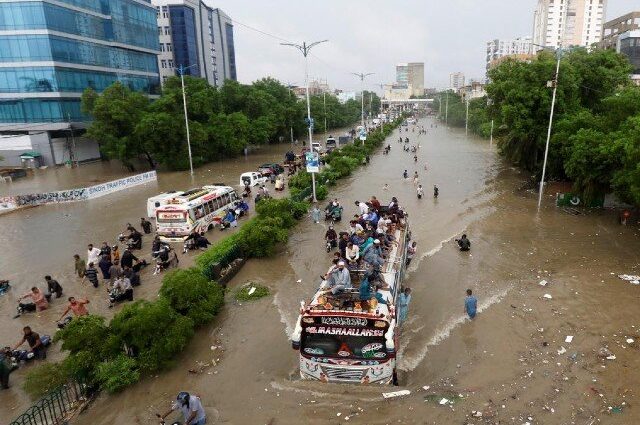 MET office predicts ‘Widespread rains’ in Karachi from July 14. A strong rain system will enter Pakistan from July 14, which is likely to gradually spread over central and upper Sindh.

The Pakistan Meteorological Department (PMD) has predicted widespread rains in Karachi and other parts of Sindh From July 14 under a new weather system expected to enter the country through India’s Rajasthan by Monday.

According to the PMD’s advisory, a strong rain system will enter Pakistan from July 14, which is likely to gradually spread over central and upper Sindh.

In a statement, Chief Meteorologist Sardar Sarfraz said that the strong rain system is currently present in Eastern India and will enter Pakistan on July 14 from Rajasthan. Karachi would receive widespread rain till July 18 or 19, the PMD chief said.

The chief meteorologist further said that Karachi may receive 60 to 80 mm of rain under the influence of this weather system, adding that the current rainfall pattern in Karachi is influence by this system, which will continue for another two to three days.

The Met office has urged the Sindh government, district administration and police to make necessary arrangements before the weather system enters the province.

It said the weather would remain partially cloudy in the metropolitan on the first day of Eid-ul-Azha, but no chances of heavy rain.

The Meteorological Department released statistics on how much rain fell till 8pm. According to the figures shared, 27.4mm of rain was recorded in Nazimabad, 22mm in Orangi, 14mm in Surjani Town, 9mm in Gadap and 6.5mm in Gulshan-e-Hadid.