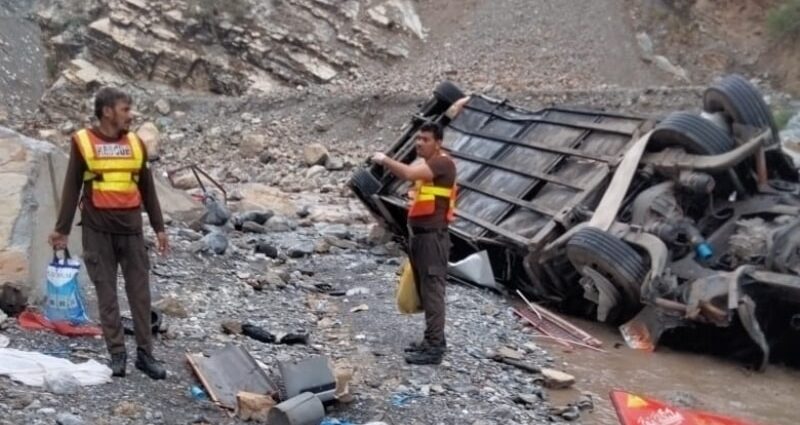 At least 25 passengers were killed and 9 others injured when a bus fell into a ravine in Shirani district of Balochistan on Sunday morning. The ill-fated coach of Sada Bahar Company was on its way to Quetta from Rawalpindi. The dead bodies and injured persons were shifted to Zhob and Mughal Kot hospitals.

According to the rescue officials, the ill-fated passenger bus was heading to Quetta from Rawalpindi when it plunged into a deep ravine near Danasar area of Shirani district.

Television footage showed rescue workers assisting bloodied passengers, while in another scene, the wreckage could be seen.

Sherani Assistant Commissioner Mehtab Shah told a private TV channel that the incident occurred near Dhana Sar. He said that the bus plunged into the ravine while speeding, killing 19 passengers and injuring 11 others. “Rainfall and speeding led to the incident,” he stated, adding that two students were also among the deceased.

Rescue teams rushed to the scene soon after receiving information, Shah said, adding that the bodies had been taken to the hospital where the process to identify them was under way.

Medical superintendent of Civil Hospital Zhob, Dr. Noorul Haq, said that the injured being brought to the facility were in critical condition. He also said that the death toll was expected to rise.

Moreover, an emergency has been declared at the hospital to provide medical treatment to those injured – which include women and children.

Prime Minister Mian Muhammad Shehbaz Sharif has expressed deep grief and sorrow over loss of precious lives in the bus accident. In a statement on Sunday, PM Shehbaz Sharif directed the authorities concerned to provide immediate and best medical aid to the injured.

The Prime Minister expressed his condolences to the families of the victims of the accident and prayed for the departed souls.

Balochistan Chief Minister Mir Abdul Quddus Bizenjo also expressed grief and sorrow over the deadly traffic incident. In a statement, the CM Balochistan directed the local administration to provide better medical treatment to those injured in the accident.

He directed the administration and the rescue officials to expedite their efforts. He ordered the authorities to impose a state of emergency in Zhob’s hospitals and provide the best medical facilities to the injured.

Punjab Chief Minister Muhammad Hamza Shahbaz Sharif also expressed sorrow over the loss of lives in the accident and extended his sympathy to the families of the victims.