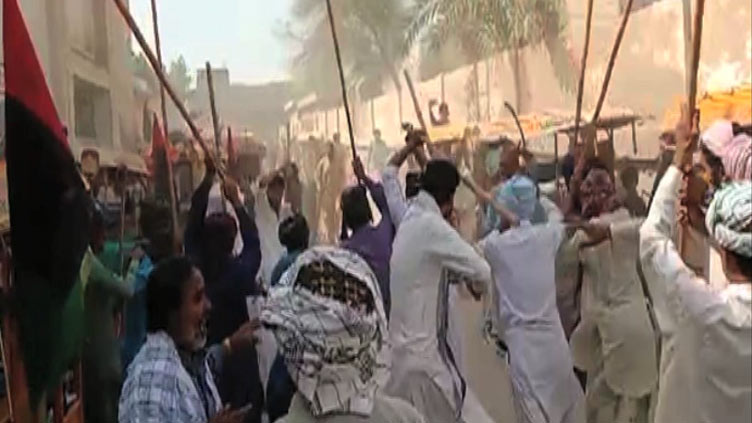 Electoral proceedings in first phase of local bodies’ elections in Sindh’s 14 districts were marred by violence, aerial firing at polling stations, scuffles and deaths on Sunday.

Two people, including the brother of a PTI candidate, died in poll-related violence while at least a dozen others were injured.

Polling, which began shortly after 8am ended at 5pm, though the ECP said voters inside stations would be allowed to vote even after the deadline.

Clashes were reported at several polling stations during voting for first phase of local government (LG) election in 14 districts of Sindh.

According to details, clashes erupted between JUI-F and PPP workers in ward 10 in Kandhkot. Thirty people were injured as they attacked each other with sticks while several vehicles also got damaged.

In a separate incident, gunmen stormed Tori Bungalow at UC Dari polling station in Kandhkot and abducted ten members of the election staff.

As many as 21,298 candidates hailing from political parties including PTI, JUI-F, PPP, MQM-P, GDA, independents, and others are vying for the 5,331 seats of the local governments in the districts. 946 candidates have already secured their seats without a fight.

As per the ECP records, as many as 9,290 polling stations are being established in the 14 districts with 1,985 declared highly sensitive and 3,448 declared sensitive. More than 100,000 staffers are performing their duties to hold the elections. Nawab Shah: Polling was stopped due to a commotion at Nadir Shah Dispensary polling station. The TLP candidate and voters protested over TLP’s missing voting symbol on the ballot paper.

In another incident, armed men stormed three polling stations of UC8 and took the ballot papers with them, causing delay in the electoral process.

Names misspelled: Meanwhile, according to the spokesperson of the Election Commission, the ECP will issue a new schedule for re-elections in constituencies where the candidate names were not spelled correctly.