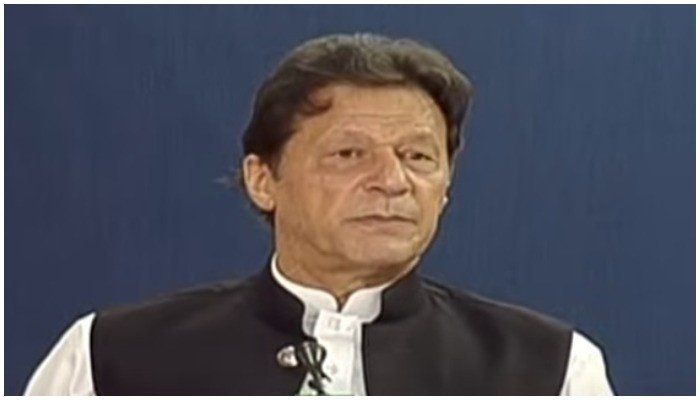 US doesn’t do regime change for the betterment of country. Imran Khan “They toppled my government out of the fear that I would make General Faiz Hameed as new army chief,” he added.

US doesn’t do regime change for the betterment of country but for their own benefits: Imran Khan

Former prime minister and Pakistan Tehreek-e-Insaf (PTI) Chairman Imran Khan on Wednesday while taking a dig at the government said that he had never thought about appointing army chief of his choice.

Addressing a seminar in Islamabad on Wednesday, Imran Khan said that he had told 11 years ago that the Pakistan Muslim League-Nawaz (PML-N) and Pakistan People’s Party (PPP) will join hands. He said that their only purpose is to protect themselves from accountability.

Reacting to the recent statement of federal minister Khurram Dastagir Khan, Imran Khan said that he had never thought about appointing army chief of his choice, adding that he had never compromised on merit throughout his life.

Taking a jibe at the rulers, the former PM said that he had started struggle against them 26 years ago, adding that he had told 26 years ago that former PM and PML-N supremo Nawaz Sharif and former president and PPP Co-Chairman Asif Ali Zardari are plunderers.

The PTI chairman went on to say that they [Nawaz Sharif and Asif Zardari] only level allegations against each other’s during the election days, adding that he had no doubt that they would join hands when he [Imran Khan] came to power.

“They toppled my government out of the fear that I would make General Faiz Hameed as new army chief,” he added.

Imran Khan maintained that the US doesn’t do regime change for the betterment of the country but for their own benefits. He asked if it was in Pakistan’s interest to allow US to have a base in the country.

The PTI chairman said that media was heavily bribed before regime change, adding that he was called “Taliban Khan” and the whole media bashed him for opposing war.

The ousted prime minister said the incumbent rulers are “afraid of the army and the Inter-Services Intelligence” as they know that their “corruption” will be caught at some point. “Imran Khan does not want to save his corruption, he does not want to appoint his army chief,” said the PTI leader. Imran Khan said that the incumbent rulers claim that he wanted to appoint an army chief of his choice.  “I never thought of appointing someone as army chief. I have never taken a decision that is not based on merit.”

The PTI chairman berated the incumbent rulers for allegedly “murdering the institutions” and appointing “their people” to every institution.

The PTI chairman said he was aware of the “conspiracy” to oust his government. “People ask me if I knew about it, then why didn’t I do anything? Well, I never imagined that they would appoint Shehbaz Sharif as the prime minister.”

Imran Khan, addressing the “neutrals”, said Shehbaz has been booked in corruption cases worth Rs16 billion. The PTI chairman said the measures being taken today will lead the country toward destruction as a “circus” is going on in Punjab and the judiciary now had immense responsibility.

Just imagine what will happen when Interior Minister Rana Sanaullah would run the affairs of National Accountability Bureau (NAB), said the former premier, adding that “they have dug the grave of justice institutions to protect their theft while the Election Commission of Pakistan (ECP) has lost its credibility”.

The PTI chairman further said that both the PPP and PML-N leaders are afraid of the army as their ‘theft’ is reported to ISI and other sensitive agencies. “Since Nawaz Sharif and Zardari have stolen money, they want to control institutions,” he added.

Imran Khan said that the United States had threatened one of our rulers to push our country back to the Stone Age, adding that America changes governments for its own benefit and not for the benefit our people.

“The US wants India to be strong and compete with China… it is their agenda to recognise Israel, and forget about Kashmir.”