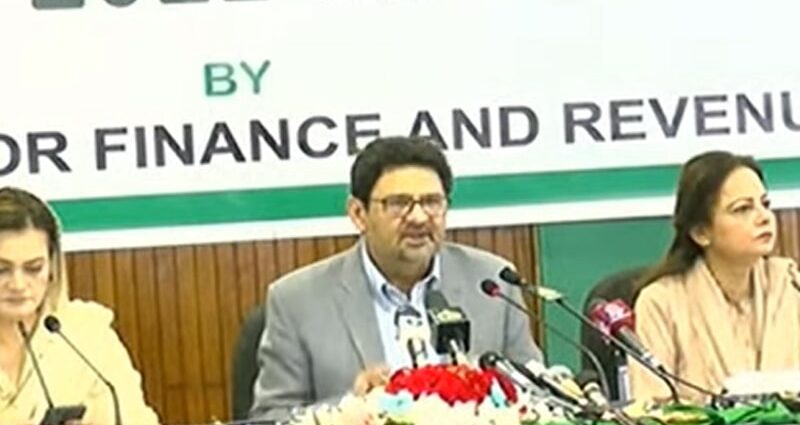 First priority was preventing the country from becoming Sri Lanka. Miftah Ismail Budget 2022-23 preparation was the ‘most difficult’ thing to do as the country was going through a very critical phase

Pakistan is a dignified nuclear power state & we will have to correct the course of our economy: Miftah Ismail

Federal Minister for Finance and Revenue Dr. Miftah Ismail Ahmed has said the target of next year’s budget is fiscal consolidation and provision of relief to the masses. He said that there is no usefulness of the politics which is causing harm to the country.

Addressing the post budget press conference in Islamabad on Saturday along with Minister for Information and Broadcasting Marriyum Aurengzab, Minister of State for Finance and Revenue Dr. Aisha Ghaus Pasha and Chairman Federal Board of Revenue (FBR) Asim Ahmed, Dr. Miftah Islamil said that the budget of Benazir Income Support Program (BISP) has been increased by thirty-five to forty percent and increase is almost Rs 100 billion. He said that flour, sugar and ghee will be provided on discounted rates at Utility Stores Corporation throughout the year.

The Finance Minister said the government has taken difficult decisions keeping in view the interest of the country. We have reduced our expenditures as well as subsidy on power and gas to reduce deficits.

Miftah Ismail said we have imposed additional taxes on the well-off people while efforts have been made to reduce the tax on personal income tax. He said Pakistan is a dignified nuclear power state and we will have to correct the course of our economy.

Alluding to the soaring prices of palm oil in the international market, the Finance Minister said the package of 20 billion rupees have been given to promote the cultivation of oil seeds. He said that Prime Minister Mian Muhammad Shehbaz Sharif talked with the Indonesian president on Friday regarding the issue of purchase of the palm oil, adding that Minister for Industries and Production Syed Murtaza Mahmood has also left for Indonesia.

The Finance Minister said special emphasis is being given to bolster our exports, expressing the confidence that these will touch 35 billion dollars mark in the next fiscal year.

Miftah Ismail said the Budget 2022-23 preparation was the “most difficult” thing to do as the country was going through a very critical phase and the government is targeting “fiscal consolidation” and “provision of relief” to the masses in the next fiscal year. Miftah Ismail said that 30 years ago he returned back in Pakistan after studying in United Stated, adding that he has not seen such critical and difficult situation of the country, which is being faced today. He said that on the one hand there is challenging atmosphere at international level and on the other hand our government administration has reached at a position after becoming more and more worst that we only increased the problems instead of making any effort to resolve these problems.

He criticized the former government for not taking steps to resolve the issues. The finance minister said they had no other option but to take tough decisions and added, “the target of next year’s budget is fiscal consolidation and provision of relief to the masses.”

During the current fiscal year, the finance minister said the government gave over Rs1100 billion subsidy to the power sector. He maintained that they have to pay Rs500bn for the losses incurred by the power companies. “It means the government of Pakistan is giving Rs16 per unit subsidy,” he added. “We are generating Rs30-35 per unit of electricity,” he said and claimed that they have the most efficient power generation plants in the world.

Bad administration, flaws rate fixation system, transmission and distribution losses and other issues were major reasons behind the high power generation rate, he added. The finance minister said that Rs400bn subsidy was given to the gas sector. He maintained that they would not let any factory be closed as they provide jobs to the people.

The government is facing losses in the gas sector, he said, adding that it is not known whether the gas is being stolen or it is evaporating.

“In violation of the agreements signed with the IMF, the previous government gave subsidies on petrol and diesel. PM Shahbaz Sharif took difficult decisions for the sake of the country. Now, the country has left no option other than tough decisions.”

Miftah Ismail said that despite having “one of the most efficient units of power generation in the world”, Pakistan is producing electricity at costly rates. “Why is it pricey? It is because of poor administration,” he added, referring to the previous government. Speaking of energy, he said when there was a loss of “Rs1,100-1,600bn” to the federation, “it will sink the company”.

He said he was “not being alarmist”, but Pakistan’s economy “cannot bear it”. He said the Rs1,600bn amount is more than the defence budget and what is spent on running civilian government combined.

When it came to gas, Ismail said a subsidy of Rs400bn was given in the current fiscal year. “You are buying gas for $20 and selling it for $1-2 — from where will the state bring the money?”

The minister then went on to question how the country was run by the PTI. “I don’t want to criticise but I will say that the subsidies that Imran Khan gave in February in violation of the IMF deal. Basically, he gave a cheque when he didn’t have any money in his account.

“We see this happening in the market. People give cheques and flee abroad. He did an act like this. In Karachi, we call it topi ghumana. Are countries run like this?”

He told the journalists present there that they and those in the federal cabinet were privileged, but the common man was not. “If you will drown them and make a Sri Lanka-like situation, the nation and history will not forgive you, and your conscience will also not forgive you.”

He then stressed: “So if difficult decisions have to be taken, they will be taken. There is no choice but to take tough decisions.”

Miftah Ismail said the country had reached this point because of “mismanagement”, but “henceforth the government will do management”.

Addressing the reporters, he requested their cooperation to not be so hard on the government for taking the tough decisions. “If I raise the petrol price, I don’t take it home, I deposit it in national treasury, and your country cannot endure losses.”

He said subsidising fuel was no longer an option as that would eventually lead to increasing interest and inflation, which would make it difficult to borrow.

Highlighting another “significant” development announced in the Finance Bill 2023, Miftah Ismail said they have introduced a new dispute resolution mechanism to solve cases involving the Federal Board of Revenue (FBR). “Earlier, the FBR officials were empowered to decide who would head the Alternative Dispute Resolution Committees (ADRCs) but It has been changed now.”

Under the new mechanism, the FBR would select one referee and the complainant would select one and both of these nominees will choose the third individual who would act as an umpire. “The decision will be based on the majority,” he said, adding that it would help address the concerns raised by the business community.

The finance minister said that they would bring 2.5 million shopkeepers into the tax net this year.

The finance minister said that it was not their priority to lodge cases against the former rulers. “Imran Khan and his team were incompetent and were involved in corruption too,” he said, adding that they borrowed 80 percent of the total loans of Pakistan’s history which were taken in 71 years. He said that Imran Khan took more loans in three years and nine months which were secured by Mian Muhammad Nawaz Sharif during his three tenures of nine to 10 years.

Miftah Ismail maintained that their first priority was preventing the country from becoming Sri Lanka.

As part of the government efforts to mitigate the impact of fuel price hike, the deserving people will start receiving Rs2,000 from June, he said.

In addition to this, the finance minister said that Punjab Chief Minister Hamza Shahbaz has launched the “Sasta Ataa Scheme” to provide relief to the poor. He maintained that the Sindh and KP governments will also provide wheat flour to the masses at cheaper rates.

Replying a question, Miftah Ismail said that the 15 percent increase will be made on the basic pay scales of 2017 and then the adhoc relief allowances will be merged in the salaries of the government employees.

Answering another question regarding a revised award by the National Finance Commission (NFC), Miftah Ismail stated that the commission must sit and discuss a new award. “KP’s population has grown since the incorporation of FATA and their allocation should reflect that.”

Minister of State Dr. Ayesha Ghous Pasha said during the media briefing that the incumbent government inherited a “difficult situation”, but the country needs to focus on growth.

She said that our aim is to ensure economic stability and take the country towards the track of growth. She said the philosophy of the budget in these difficult times had been to put minimum burden on the comman man. He said we are providing relief to the common man and this includes the cash amount of two thousand rupees to the deserving families.

Aisha Ghaus Pasha said that subsidy has been given to the farmers to enhance agro productivity and cut the import bill of food items. She said reducing budget deficit and non-imposition of indirect taxes are anti-inflationary measures which were taken to protect the poor.