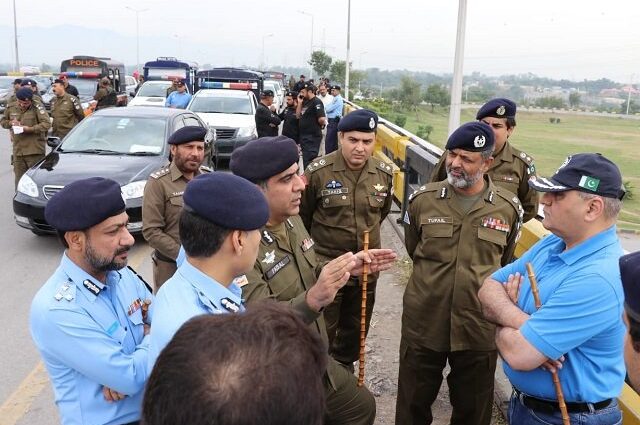 Imran Khan responsible for causing disorder in federal capital during ‘Azadi March’. Police Report The party chairman had directed protesters to enter the Red Zone after the culmination of the march against the court's orders

The Islamabad Police on Friday submitted their report to the Supreme Court of Pakistan, declaring Imran Khan responsible for causing disorder in the federal capital during PTI’s “Azadi March”.

The report, regarding the violence during PTI’s long march on May 25, further stated that the party chairman had directed protesters to enter the Red Zone after the culmination of the march against the court’s orders to hold a rally on H-9 ground.

In the report, the police stated that 700-800 protesters violated the court’s orders by entering the Red Zone.

The police claimed that a total of 21 citizens were injured while the PTI protesters, equipped with arms and sticks, tried to enter the restricted area. During this, the police used tear gas shelling to disperse the protesters.

“The PTI Chairman Imran Khan told his workers to reach the D-Chowk in a video message. The police and law enforcers made every effort to stop the protesters but they advanced removing all containers and barriers on the night between May 25 and 26,” the report stated, adding that the police didn’t use any type of force when the protesters breached the security cordon.

The report further stated that the police themselves removed some of the barricades, mainly at Faizabad, Zero Point and 26 Number Chowrangi, to let the participants of the march move towards the H-9 ground.

“None of the participants, including Imran Khan, reached the H-9 ground despite the judicial orders, while Fawad Chaudhry, Zartaj Gul, Saifullah Niazi and Imran Ismail kept provoking people,” it added.

Islamabad Inspector-General of Police Dr. Akbar Nasir Khan has also attached video evidence and tweets of the PTI leaders with the report.

The IG’s report says that the administration implemented the court’s orders in letter and spirit. Roads leading to the Red zone were sealed completely, it added.

The report says that Police, Rangers and FC actions against the protestors were brought to a halt after the SC’s orders. PTI leadership instigated their workers to remove barriers and move towards D-chowk, the IG claimed.

The Islamabad IG added that PTI’s armed protestors threw stones at the police, set trees on fire, and tried to run over policemen who tries to stop them from entering the Red Zone injuring at least 23 policemen. The protestors used heavy machinery to remove hurdles that the administrations had placed, the report said.

Approximately 2000 protestors, led by Imran Ismail and Saifullah Niazi tried to enter the Red Zone, it said. The police used tear gas to disperse the protestors, the IG added.

The IG claimed that the PTI workers entered the Red Zone on senior leaders including Fawad Chaudhry, Zartaj Gul and Saifullah Nazi’s orders. The workers were instigated to reach the Red Zone to welcome PTI Chief Imran Khan, the report says.

Dr. Akbar says that the administration made multiple announcements to keep the protestors away from the Red Zone, but they did not comply.

The IG claims that the police tried to avoid the use of power to their best, and Article 245 was invoked when things were getting out of hand.

The report says that a total of 200 to 300 protestors removed all obstacles and entered the Red Zone. The route to the allocated location between G9 and H9 park was clear, but none of the protestors went there, it added. A total of 77 people were arrested by the police, the report said.

Post Views: 40
2022-06-11
Previous Post: Pervez Musharraf going through a difficult stage where recovery is not possible: Family
Next Post: PPP has stressed for taking decisions related to terrorism issues through Parliament.