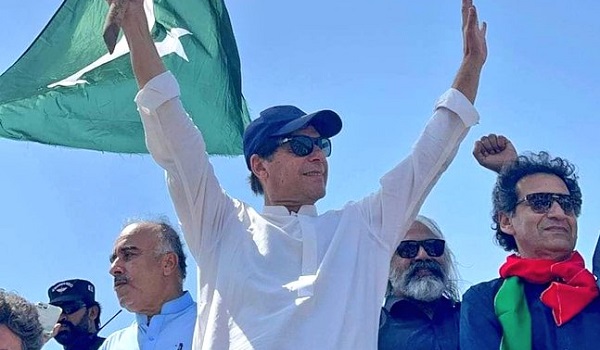 After a packed day of political drama and violence across Pakistan, Pakistan Tehreek-e-Insaf (PTI) Chairman and former prime minister Imran Khan gave on Thursday morning a six-day ultimatum to the PML-N-led federal government to dissolve the assemblies and announce an election, indicating an end to the party’s much-touted “Azadi March”. Imran Khan said that two families are sucking the blood of the country from last 30 years, adding that until and unless the money will be recovered from their pockets after holding their accountability and send them in jails they will not allow the country to move forward. Imran Khan said that in long march of the party, the people from Punjab will also join.

The PTI chairman was off to Bani Gala after addressing the participants of the “Azadi March” at Jinnah Avenue, leaving behind his supporters who marched for hours in anticipation of a major public gathering and sit-in.

The PTI marchers, who were in D-Chowk most of Wednesday night, had by this time entered Islamabad’s prohibited Red Zone, which is home to several sensitive buildings, including Supreme Court of Pakistan, PM House, US Embassy. They managed to enter despite heavy security. They later started dispersing.

In his speech at Jinnah Avenue, Imran Khan said he had reached Islamabad after 30 hours of traveling from Khyber Pakhtunkhwa.

“The government tried every method to crush our Azadi March. They used teargas on peaceful protests, our homes were raided and our privacy was violated. However, I have seen the nation free itself of [the] fear of slavery,” he said.

Imran Khan said three PTI workers lost their lives in Karachi, while two workers were thrown off Ravi Bridge and thousands others were arrested.

The ousted premier claimed he was providing the coalition government with ample time to hold general elections in June. “It is my duty to unite the nation,” Imran said adding that he was grateful that the nation had united against the “imported government.”

The PTI leader accused the government of coming into power to dismiss the cases of corruption against themselves, “you have not come to run the country.”

Referring to the judgment passed by the Supreme Court, the PTI chief stated that his “peaceful protests” could not be legally hindered by the federal government. Empowered, Imran Khan stated that he would gather two million people in the federal capital for his cause.

Imran Khan said, “My people have overcome all fears and ready to sacrifice their lives. They tried to fail our movement of independence but people of every school of thought are united in our protest. My people will never accept the imported government.”

Imran Khan said that the “imported government” was imposed on Pakistan through American conspiracy. “More than half of the cabinet is on bail. These Mir Jaffars and Mir Sadiqs were part of the conspiracy,” he added.

Imran Khan went on to say that it is against the wish of the people that “these thieves have been given the government and they were supposed to be punished.” Imran also thanked Supreme Court for taking suo motu notice on the situation.

He further questioned,” Isn’t it our legal right to protest peacefully? Did we stop long marches of Bilawal Bhutto or Fazal ur Rehman? We did not ever tried to stop their rallies.”

The former prime minister along with other party leaders, on Wednesday had reached Islamabad after PTI workers and supporters also made their way towards the federal capital, pushing aside containers and braving tear gas shelling.

As the chairman’s caravan made its way to the famous D-Chowk after entering Islamabad, the federal government called in the Pakistan Army for the security of the capital’s Red Zone.

The decision was taken for the protection of important government buildings, including the Supreme Court of Pakistan, Parliament House, Presidency, Prime Minister Office and others.