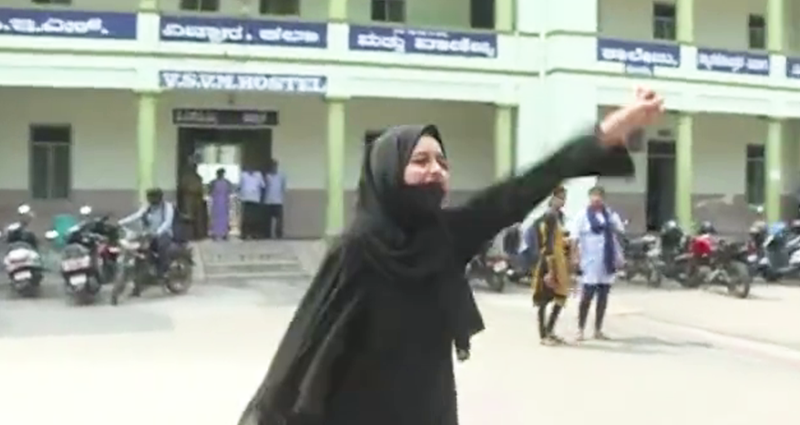 Six Muslim students in hijab were not allowed entry to examination centre and returned home without taking their Class 12 exams in the Indian state of Karnataka’s Yadgir district.

According to Kashmir Media Service, the students who had come to write their economics exam, requested the authorities to allow them writing the paper wearing hijab but their request was turned down.

The students walked out of the examination centre, refusing to take off their hijab. The incident took place at the Government Pre-University College in Yadgir district.

The crucial Class 12 exams are being conducted across Karnataka. As many as 68,84,255 students have enrolled for the board exams, which began on April 22 amid tight security in the backdrop of the hijab row.

The BJP-led Hindutva government in Karnataka has banned hijab in classrooms and announced that hijab-clad students and teachers will not be allowed entry to the examination centres.

Aliya Assadi, one of the petitioners, took to Twitter to slam the decision.

“Again and again we face disappointment! BJP MLA Raghupathy Bhat had threatened us with criminal cases against us if we go to attend exams. Where is our country headed to?” she questioned.

On April 22, Assadi and Resham Farooq tried to enter the examination centre in Udupi in hijab. The BJP MLA Raghupathy Bhat  had also warned that if the students repeat their act, they should be charged with a criminal case for contempt of court.

The newly married Dalit couple said that the Hindu priest stopped them from entering the temple premises in the Indian state of Rajasthan.

According to Kashmir Media Service, the couple was not only stopped from entering the temple but was also publicly humiliated in Jalore district of the Indian state.

The evils like untouchability and social boycott exist in India cursing the life of lower caste citizens in the country.

After the wedding ceremony on April 21, when the Dalit couple Ukaram Rathod and Santu, along with some relatives, went to the Neelkanth Mahadev temple the following day to offer a coconut, they were stopped outside by the priest and asked to pray and make their offerings from outside.

The aggrieved party said that the Hindu priest stopped them from entering the premises citing village rules like people of his community cannot enter there, so they should offer prayers from a distance. This led to an argument between some youths, who were accompanying the couple, and the priest. But they were still not allowed to enter the temple.

A video of the bride pleading with the priest with folded hands has now gone viral on social media. In the video, the Dalit couple and their relatives are clearly seen being abused and stopped from entering the temple.

Later, Tararam Meghwal from the bride’s side, lodged a complaint with the Bhadrajun police station.

Station House Officer (SHO) Pratap Singh said that the victim had said that the priest of Neelkanth Mahadev temple prevented her from entering there and also abused her. A case has been registered under sections of the SC/ST Act, he added. KMS—5R