“The crime of Mr. Ahsan Untoo is simple that he has spokes truth to power that Kashmir is witnessing war crimes and crimes against humanity under illegal military occupation of India,” said Kayani, president of Tehreek-e-Kashmir UK, commenting on continued detention of Untoo, a resident of Indian Illegally occupied Jammu and Kashmir (IIoJK).

A prominent human rights defender and political activist, Untoo leads International Forum for Justice and Human Rights whose work has brought relief to hundreds of Kashmiris who are victims of Indian occupation in IIoJK.

Untoo was abducted by Indian occupational forces on January 13, 2022 and illegally detained in Raj Bagh Police Station. He is currently lodged in Central Jail Srinagar. 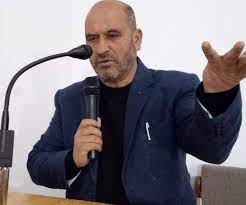 Despite being protected by International Humanitarian Law for his human rights work, Untoo was neither produced before courts nor was any bail granted to him by the court which are directly under the control of fascist Modi regime.

More so, the occupational regime of so-called lieutenant governor Untoo is being denied medical treatment inside the jail.

“This speaks of volumes of barbarity committed by fascist Modi regime in IIoJK,” said Kayani. “If this is the situation of a renowned human rights defender, what should be the situation of common Kashmiris,” Kayani asked.

Untoo was tortured by the occupational military forces of India before his illegal arrest.

And soon after, Untoo gave testimony against Indian war crimes to UK-based Stoke White law firm which, along with application on behalf of family of a Pakistani prisoner Zia Mustafa who was killed by Indian occupational forces in IIoJK, filed a case against India’s Modi regime, Naravane and Amit Shah.

The London-based law firm filed an application with British police seeking the arrest of General Manoj Mukund Naravane and Amit Shah over their roles in war crimes in IIoJK.

Stoke White submitted extensive evidence to the Metropolitan Police’s War Crimes Unit in Lodon, documenting how Indian forces headed by Naravane and Shah were responsible for the torture, kidnapping and killing of activists, journalists and civilians – particularly Muslim – in the UN-designated region.

“The international community must open its mouth and hold India accountable, else it exposes hypocrisy of those who claim to promote democracy and human rights,” Kayani said.

He said that the western world must hold on its moral values and force India to release the political prisoners, human rights defenders and journalists in IIoJK.

“The only crime these professionals are doing in IIoJK is that they are exposing fascist Indian regime’s war crimes and violation of international law and human rights conventions in the UN-designated disputed territory,” the TeK UK president said.

Urging immediate release of Untoo, Kayani said India was on a war path against human rights defenders and organizations in IIoJK.

Before Untoo’s arrest, Indian occupational forces abducted globally renowned human rights defender Khurram Parvez. He has been detained under a so-called anti-terror law. So far, India prosecution has failed to prove anything against Khurram or his organization.

“But the fascist Indian regime wants to remove all evidence collected by Khurram and his organization — the JKCCS,” Kayani said. “The Indian fascist regime has removed the website of JKCCS. This is condemnable.”

Kayani urged Kashmiri diaspora groups to come together and devise a proper strategy to hold India accountable for her barbarity.

“Tehreek-e-Kashmir UK is ready to host a discussion in this regard; we are ready to host all groups for a round table discussion for a way forward against on right to self-determination movement in IIoJK,” he added.