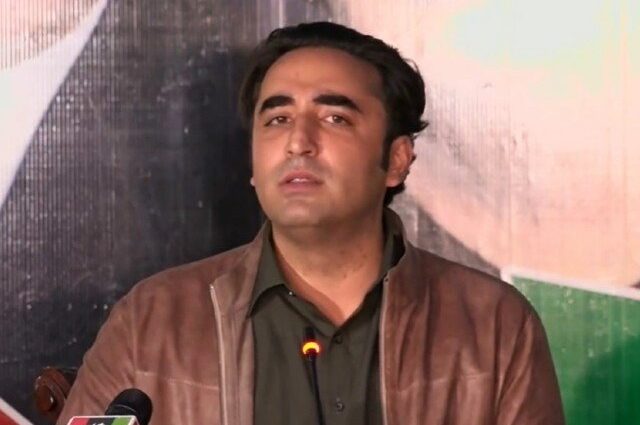 No one can stop the parliamentarians from voting. Bilawal Bhutto Zardari Challenge of no-confidence that Imran Khan is facing is given by Pakistani people: PPP Chairman

Challenge of no-confidence that Imran Khan is facing is given by Pakistani people: Bilawal

Says no one can stop the parliamentarians from voting

Chairman Pakistan People’s Party Bilawal Bhutto Zardari has said that the challenge of the no-confidence that Imran Khan is facing is given by the Pakistani people. PPP’s 10-day long Awami march proved that the people no longer trust Imran Khan.

Addressing a press conference at Zardari House Islamabad on Sunday, Bilawal Bhutto said that it is a result of the PPP workers’ three-year long struggle that all the democratic forces of the country are using democratic means to challenge this undemocratic person. This is our right and a parliamentary tool. Just like it is the common man’s right to go to the voting booth and cast their vote, it is a parliamentarian’s right to vote in the no-confidence. Imran Khan is using abusive language since he is panicking and can clearly see his defeat. A respectable man should have himself realized that he does not have the numbers. Imran is an undemocratic man and does not believe in democracy, law or justice. He believes in a fixed match and only knows how to rig the elections. Chairman PPP said that Article 6 of our constitution is very clear and applies to every person who wishes to meddle with a constitutional process. When everyone can see that this man is trying to commit rigging, his representatives are announcing to not count votes and the police is forcefully barging into the parliament lodges to arrest honorable members, what message is being sent out?

PPP Chairman appealed to the Chief Justice of the Islamabad High Court, the Chief Justice of the Supreme Court of Pakistan and the Chief Election Commissioner to protect the voting rights of every parliamentarian. He said that no one should be stopped from casting their vote, whether they belong to the opposition or the treasury benches. There is an ongoing conspiracy to deprive the members of the parliament of their right. We will not tolerate this. We appeal to every single democratic individual who has sworn an oath to protect the constitution of Pakistan to ensure that the constitutional process is followed. This is the sole solution that can help the country emerge from this crisis. We cannot run this country on the rule of the jungle. There has to be a law of the land. We are peaceful and democratic people who did not throw a single pebble during a 10-day long protest all over the country. It is the right of the parliamentarians to cast their vote, and they will do so.

Bilawal Bhutto said that the Pakistani nation knows that it is symbolic of the losing team to use abusive language and engage in ball-tampering. We will not let this defeated man rob the mandate of the people. This no-confidence is not only against Imran Khan but also against the economic crisis that has engulfed every Pakistani who is now facing inflation and unemployment. This no-confidence is against the foreign policy that has isolated Pakistan in the world and created distances with our friends as well as worsened the situation with our enemies. This no-confidence is against the polarized anarchy we are headed towards as a society, caused by Imran Khan. We want to head towards free and fair elections after the no-confidence. We want to create an environment in which the representatives of the people sit together and transparent elections are held so that a government that has the mandate of the people is formed.

Bilawal Bhutto said that we cannot tolerate for Pakistan’s economic and foreign policies to be harmed because of a single man, or for the institutions to be made controversial. Imran Khan did not only intend to rig the no-confidence, but also the upcoming elections. This man’s foreign funding case is still pending in the Election Commission of Pakistan. We request the ECP to announce its decision regarding this case at its earliest. The nation should know which foreigners belonging to India and Israel funded this man.

Responding to questions, Bilawal Bhutto said that the reason he is proud of this no-confidence as this is the first democratic one in the country’s history and is backed by the people of Pakistan. He said that the statements of the prime minister are a result of sheer panic and desperation, and should not be given attention. No prime minister in the history of Pakistan has ever been so desperate, who feels compelled to abuse everyone.

We would like to ask the PM who he termed as ‘animals’ in his speech. The prime minister’s desperate efforts will not be successful. The coming time is very difficult and the result of Imran Khan’s tsunami will be before us. This calls for an environment where people work together to help this country emerge from the crises caused by Imran Khan. We will be successful in creating such an atmosphere.

He said that no delay was taken in his efforts to approach those who could aid in the removal of this undemocratic man. If we want electoral reforms, we would have to work with everyone. This is how politics is done, listening to others, putting forth our perspective and then reaching a compromise. This country is not of a single person. Talking to representatives of political parties for the betterment of the people is something we will continue to do.

Would Imran Khan be so baffled had our numbers not been complete, Chairman PPP asked. I challenge Imran Khan to hold a session and let his members vote. Our no-confidence will be successful. Our meetings with the former allies of the government have exceeded expectations.

Bilawal Bhutto said that we believe in democracy and are confident as well as happy to see that our opponent is so worried. We are preparing for a win. Imran would not have been in such trouble had he learnt from the Charter of Democracy. We have come to know that schools are being closed wherever Imran Khan is holding speeches and the students are being made to attend. Audio of applause is being played via soundtracks.

Chairman PPP said that it is his advice to Imran Khan that he should resign. Imran’s threats will go against him. Bilawal Bhutto said that we have had issues with the MQM but both political parties are of the view that we have a better chance of improving people’s lives if we work together. We do not need to agree on every issue but there is scope for common ground to be reached.