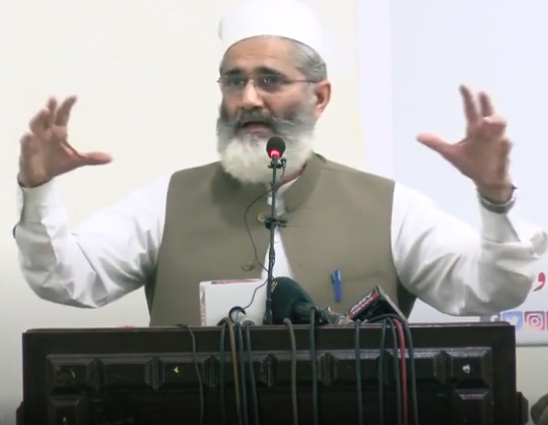 Sirajul Haq criticized the PM for using foul language against political opponents The masses should be allowed to choose their representatives through fresh and fair polls. Siraj Ulhaq

Jamaat-e-Islami Emir Sirajul Haq has demanded fresh elections, saying the replacement of faces after success of no-trust movement against the prime minister will not bring any change.

The masses should be allowed to choose their representatives through fresh and fair polls, he said while addressing sit-in against inflation, unemployment and corruption at Murree Road Rawalpindi on Sunday.

The JI staged sit-ins in Jehlum, Chakwal and Bahwalnagar under its ongoing 101-sit-in movement. JI Naib Emir Liaqat Baloch addressed the gathering in Jehlum and Chakwal while JI Secretary General Ameerul Azim spoke to the people in Bahwalnagar.

Sirajul Haq criticized the prime minister for using foul language against political opponents, saying the language being used by Imran Khan in public meetings did not suit to a prime minister. The PM, he said, was using state resources to conduct public meeting and was also violating the rules of Election Commission of Pakistan by holding rallies in the areas where local government elections were set to be held at the end of the month. He said the prime minister had nothing on credit to show the government performance and he started uttering derogatory remarks against the opposition.

He said the PTI, the PML-N and the PPP were the status quo parties who failed to perform during their years long rule over country. The people of Pakistan, he said, needed real change and Islamic system which was the solution to their problems.

The JI chief criticized the PTI for unleashing attack on media, saying the media supported the ruling party in the past to come to power but it faced the prime minister wrath when it started criticizing the government performance. He said the PTI introduced the ordinance to control the media which even the dictators could not dare to introduce in the past. He said the JI was standing with journalist community in their struggle for free media.

Sirajul Haq said the three parties destroyed the economy and made surrender before the IMF. He said the ruling elite were united to keep the country under US influence. He said the rulers were failed to fight for Kashmir cause. He said the JI wanted to bring real change through peaceful democratic manner. He appealed to the masses to back the JI struggle to get rid of the corrupt system and status quo parties.