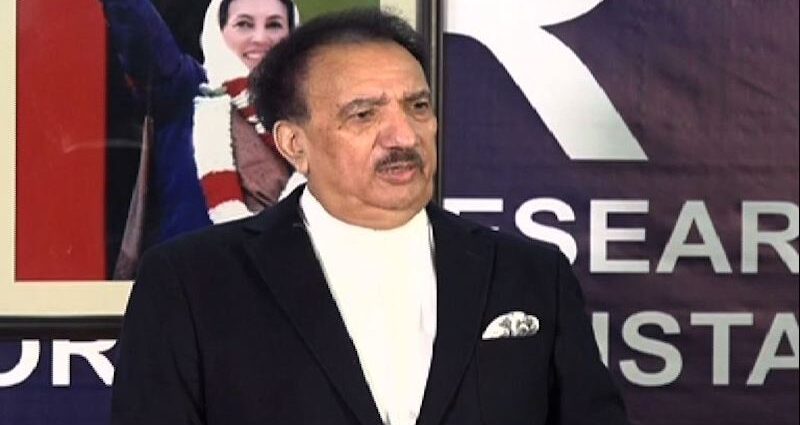 Earlier this month, Rehman Malik was put on a ventilator after his health deteriorated due to Covid-related complications.

Malik had tested positive for the coronavirus in January. At that time, his spokesperson said the former senator had initially been shifted to the intensive care unit of a private hospital in Islamabad after his condition deteriorated. However, his condition had continued to worsen and doctors subsequently put him on a ventilator on February 1.

The spokesperson said the virus had affected Malik’s lungs and the former senator had been complaining of breathing problems after contracting Covid.

Talking to the media, Malik’s nephew Waqas Malik said the former senator’s funeral prayers would be held at the mosque in Islamabad’s H-8 sector at 2:30 PM today (Thursday).

Abdul Rehman Malik obtained a master’s degree in statistics from the University of Karachi in 1973 and was awarded an honorary PhD from the same institution in 2012.

The deceased had a long career as a politician and held many portfolios, including his term as interior minister from 2008 to 2013. Earlier, from 2004 until 2007, he served as the chief of security of Benazir Bhutto and became senior official of the central committee of the PPP.

Owing to his services, the government of Pakistan had awarded him with one of the highest civilian awards in the country — Sitara-e-Shujat (the Star of Bravery). He also received one of the most prestigious civil decorations — the Nishan-e-Imtiaz (the Order of Excellence) — from the state.

He had a long career as a politician and held many portfolios, including his term as interior minister from 2008 to 2013.

Meanwhile condolences poured in from PPP stalwarts and political leaders from other parties on Malik’s passing.

He added that Malik’s services to the country were unforgettable and the PPP leadership and workers shared in his family’s grief.

In his message, PPP Chairperson Bilawal Bhutto Zardari expressed grief over Malik’s demise and said the former minister had “always practiced politics of honesty and principles.”

Both the president and prime minister prayed for peace of the departed soul.

They also sympathized with the grieved family and prayed for strength to them to bear the loss.

Foreign Minister Makhdoom Shah Mahmood Qureshi also expressed his condolence over the death of the senior PPP leader and prayed for peace of the deceased soul, besides sympathising with the bereaved family.

Meanwhile, Minister for Information and Broadcasting Chaudhry Fawad Hussain also condoled the demise of Senator Rehman Malik and prayed to Allah Almighty to rest his soul in eternal peace.

“Rehman Malik passed away – Inna Lillah e Wa Inna Elah-e-Rajaioon . . . May Allah Almighty rest him in peace,” the minister expressed his feelings in a tweet.

Highlighting deceased’s role into the investigation of Hudaibiya case, Fawad said though justice was still awaited in that case but late Rehman’s probe had exposed the corrupt elements how modern techniques they were applying for the corruption which also stunned the general public.

Minister of State for Information and Broadcasting Farrukh Habib expressed his deep grief and sorrow over the demise of former Interior Minister Senator Rehman Malik.

Interior Minister Sheikh Rashid Ahmed expressed his grief over news of the demise and extended condolences to the departed’s family.

PPP Senator Saleem Mandviwalla said he was “deeply saddened” on hearing the news and praised his former peer as a “good man and amazing politician”.

“Rehman Malik’s death is a great loss for the country’s politics. The vacuum created by Rehman Malik’s demise can never be filled,” he said, adding that his services for the PPP will always be remembered.

Taking to his official Twitter handle, Speaker of the National Assembly Asad Qaiser wrote: “I pray to Allah Almighty to elevate the ranks of the deceased and grant patience to the bereaved.”

Expressing his grief, Adviser to Prime Minister on Parliamentary Affairs Dr. Zaheeruddin Babar Awan said the news of the death of Rehman Malik, who was his cabinet colleague and old fellow, came as a shock.

Post Views: 474
2022-02-24
Previous Post: Opposition was hopeful of emerging victorious in parliamentary battle to oust the govt: Marriyum
Next Post: SC rejects Monal Restaurant’s request to be given a stay order & allowed to reopen