A sessions court in Islamabad on Tuesday reserved its verdict in the Noor Mukadam murder case after all the parties made their final arguments.

Additional Sessions Judge Ata Rabbani presided over the court proceedings on Tuesday and later stated that the verdict will be announced tomorrow (Thursday). 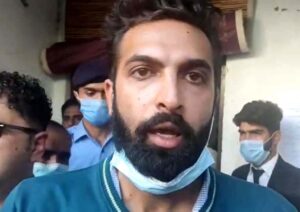 Noor, 27, was found murdered at a residence in the capital’s upscale Sector F-7/4 on July 20 last year. A first information report (FIR) was registered the same day against primary accused Zahir Zakir Jaffer — who was arrested from the site of the murder — under Section 302 (premeditated murder) of the Pakistan Penal Code (PPC) on the complaint of the victim’s father, Shaukat Ali Mukadam, who is a retired diplomat.

After the FIR was registered in the murder case, Zahir’s parents and household staff were arrested on July 24 over allegations of “hiding evidence and being complicit in the crime”. They were made a part of the investigation based on Noor’s father’s statement.

He accused the defence of not even sparing the court’s sanctity during the cross-examination. “It was claimed that Shaukat had got the accused arrested due to being influential,” Asghar said, contending that if there was pressure from him then the house where the incident happened would have been sealed shut instead of people going to and fro.

“It was said that planning for this case was done at the police station. If that was true then there would’ve been conformity [in the police reports] and the writing would also have been the same,” he argued.

Asghar added that the defence’s claim about Noor and Zahir being in a “living relationship” was a concoction.

Regarding some purported discrepancies in the investigation, he said they could be chalked up to “incompetence but not ill intent”.

Meanwhile, another counsel for Noor’s father, Shah Khawar, said there was solid evidence present in the case based on the digital video recorder, call data record, forensic analysis and DNA reports.

“All evidence in the case was collected scientifically,” he said, adding that the prosecution had proved the case against the accused and called on the court to deliver a strict punishment.

Meanwhile, prosecutor Rana Hassan Abbas critiqued the defence’s attempt to find fault with Shaukat not making a statement about the dead body, saying “the biggest evidence is that Zahir Jafar was arrested at the scene”.

“The DVR was declared authentic and taken as the final piece of evidence,” he said, adding that Zahir had been arrested from the crime scene with the murder weapon while blood was found on his clothes. “After that, there is no doubt left that he is guilty,” Abbas said.

The prosecutor said Zahir’s photogrammetry test had also matched — a fact that he said “cannot be denied”.

He rejected the primary accused’s claims that Noor was under the influence of drugs, saying: “Drugs and poison were not detected in Noor Mukadam’s lungs according to the medical report.”

Talking to the media after the hearing, Noor’s father, Shaukat Mukadam, said that he sought “maximum punishment” for the accused and reposed his confidence in Judge Ata Rabbani.

“He has conducted a fair and transparent trial,” Shaukat said of the judge’s handling of the case, adding that he was “completely satisfied” with the investigation despite “some ups and downs” as he also commended the police for operating “under pressure”.

“It was a difficult time but I had full faith in my daughter. Noor Mukadam was a good girl and she was not involved in anything wrong,” Shaukat said.

Following multiple twists and deferrals, a local court in Islamabad has finally reached a decision in the high-profile case pertaining to the murder of Noor Mukadam.

The District and Sessions Court judge, Justice Ata Rabbani, reserved the verdict in the case, after petitioner’s counsel completed his arguments in the case. The reserved verdict will be announced on February 24.

The case took a new turn on February 10, when Zahir pleaded not guilty to the crime. On behalf of the main accused, his lawyer submitted his client’s defence in the case in a questionnaire given by the court.

Zahir told the court that he was in a “relationship” with the victim for a long time and both the families also knew each other. However, he clarified that he was “not in touch with Noor for six months.”

“On July 18, she voluntarily came to my house with a huge quantity of drugs. Noor told me to host a drug party and I refused,” said Zahir.

The accused then claimed before the court that on July 20 the victim invited her friends to the said party. He added he was alone at home at the time, as his parents and other family members were in Karachi for Eid celebrations.

“A few hours later when I woke up, I found myself tied in my lounge,” said Jaffer, adding that after a few minutes, uniformed police and people in civil clothes “rescued” him.

“When I was rescued, I got to know that Noor was murdered by someone attending the drug party or someone else murdered her,” said Jaffer.

He also claimed that the victim’s father is an “influential” person and got him involved in the case by pressurising the police.

The prime suspect in the murder of Noor Mukadam, Zahir, was formally charged for the crime by an Islamabad court in October 2021. Besides him, two of the family’s employees — Jamil and Jan Mohammad — were also indicted, along with Zahoor.

Noor Mukadam, a 27-year-old woman, was murdered on July 20 within the limits of the Kohsar police station in Islamabad’s F-7 area.

The Islamabad police arrested suspect Zahir on the night of July 20 from his house where, according to Noor’s parents, he killed her with a sharp instrument and severed her head.

Post Views: 171
2022-02-23
Previous Post: President Joe Biden announced an expansive sanctions package against Russian
Next Post: Opposition parties will not get anything from their protest campaigns: Sheikh Rashid