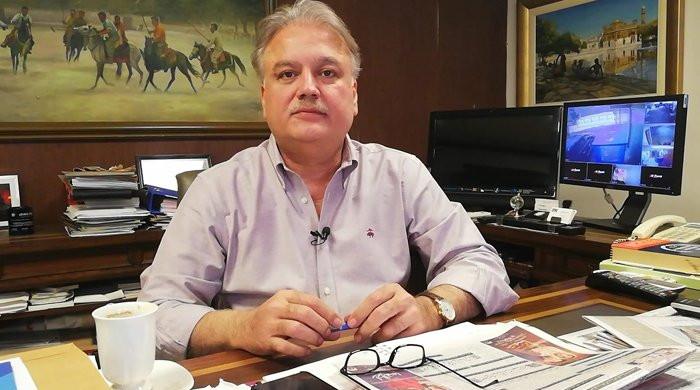 In a condemnation statement issued on Wednesday, the senior journalists have strongly condemned the restriction on the freedom of expression. The leaders of the Pakistan News Agencies Council (PNAC) have said that the government is using cheap tactics to silence the dissenting voices raised against it, adding that they condemn this act. The PNAC leaders demanded that all the cases registered against Mohsin Jamil Baig should be withdrawn and legal action should be taken against the personnel and their heads who entered the house of Mohsin Baig without the warrants.

They said that the arrest of Mohsin Baig is severe kind of victimization act and it is result of the evil and dictatorial thinking.

Prominent journalist and Editor-in-Chief of Daily Jinnah and Online News Agency Mohsin Jamil Baig has been arrested following a raid by the Federal Investigation Agency’s (FIA) cyber crime wing, after he allegedly shot at and roughed up members of the raiding team. Meanwhile police presented Mohsin Jamil Baig before the anti-terrorism court judge in Islamabad. The court handed over him in police custody on three-day physical remand. The court has also ordered conducting medical examination of Mohsin Baig from Pakistan Institute of Medical Science (PIMS).

Talking to media persons on the occasion of his appearance in court Mohsin Baig said that two of his ribs have been broken. Mohsin Baig alleged that FIA officials tortured him on orders of PM Imran Khan, adding that he was in police custody and not in FIA custody.

According to a press release issued by the investigation agency, the FIA’s Cyber Crime Circle raided Mohsin Baig’s house after obtaining a search and seizure warrant from the relevant court.

“During the raid, Mohsin Baig and his son and servants directly fired at the FIA team and made two officials hostage,” the press release said. It added that Baig was arrested after he ran out of bullets and was taken to Margalla police station where legal proceedings were underway.

The FIA said it conducted the raid on the complaint of Communications Minister Murad Saeed, who had registered a first information report (FIR) against Baig at a cyber crime reporting centre of the agency in Lahore under Sections 20 (offences against the dignity of a natural person), 21-D (offences against modesty of a natural person and minor) and 24 (cyber stalking) of the Prevention of Electronic Crimes Act, 2016 read with Sections 500 (defaming army officers) and 555 (statement conducing to public mischief) of the Pakistan Penal Code.

The FIR said Baig had “assassinated” Saeed’s character by using “immoral and abusive language” in a talk show. It said Baig had related a “baseless story with derogatory remarks” which was subsequently shared on social media and had “shattered” the federal minister’s image in public.

It said the comments had caused disgrace to the minister’s personality and created uncertainty in the public. The FIR called for a case to be registered against Baig.

Mohsin Baig was part of a TV panel last week where the anchor and panelists had questioned the decision to award Federal Minister Murad Saeed the top honour in a ceremony to celebrate the top 10 best performing federal ministries. The panel had made several critical and disparaging remarks about the federal minister, insinuating with innuendoes that some ‘other factors’ were behind the award than his ministry’s performance.

The programme had attracted a flurry of criticism from government officials and NewsOne, the channel that aired the show, was reportedly taken off air by cable networks. The Pakistan Electronic Media Regulatory Authority (PEMRA) had also issued a show-cause notice to the channel for airing ‘unethical’ remarks about a federal minister.

Meanwhile, Special Assistant to the Prime Minister on Political Communication Shahbaz Gill shared a video, reportedly of Wednesday’s confrontation outside Baig’s residence, in which the media personality can be seen toting a gun, manhandling an unidentified individual and kicking him down to his knees. As Baig assumes a shooting stance, gunshots are heard, the video shows.

Meanwhile, Baig’s counsel, Raheel Niazi, moved a petition in the court of Additional Sessions Judge Zafar Iqbal, for his client’s recovery. The judge appointed a bailiff and ordered Baig to be produced before the court.

Talking to the media in Islamabad outside the court, Niazi said that some men in civvies barged into the Baig’s home on Wednesday morning. When they were asked to identify themselves, they refused, following which an altercation took place, he claimed.

Niazi said when he reached the scene on Baig’s request he saw that the area superintendent (SP) and deputy superintendent of police were there as well. He said the police officials were told that Baig was ready to go with them if arrest warrants were present.

“The SP said: ‘I will return with the warrant.’ He went out and told the people in civvies to go inside and attack. Then they entered the home — no clue who they were nor did they show their wallets — and misbehaved with the family member, slapped children and snatched and broke mobile phones and cameras.

“Unknown people abducted (Baig) and took him away and this all happened under the supervision of the SP. He was present at the scene and instead of following the legal procedure, he got everything done in an illegal manner and kept on saying, ‘I have orders from higher authorities and they are in contact with me on phone and I have to follow their orders — be it legally or illegally,'” Niazi said.

Later, the Margalla police station provided a report, to the court bailiff that said an FIR was registered against Baig under Sections 148 (rioting, armed with deadly weapon), 149 (unlawful assembly of people), 186 (obstructing public servant in discharge of public functions), 324 (attempt to murder), 342 (power to examine the accused) and 353 (assault or criminal force to deter public servant from discharge of his duty) of the Pakistan Penal Code and Section 7 of the Anti-Terrorism Act.

Meanwhile Opposition leaders condemned Baig’s arrest with PML-N President Mian Muhammad Shehbaz Sharif saying it showed how “panicked the regime is” since Baig was once a friend of Prime Minister Imran Khan. He assailed the premier for an inability to bear “minor criticism” and said free speech had been heavily restricted in his tenure.

“Arrest of Mohsin Baig, once a fast friend of IK, shows how panicked the regime is. Niazi sb gives long sermons on democray & morality but cannot stand even minor criticism. Free speech has vastly been curtailed in last 3.5 years of his rule. It is worst time in nation’s history” Shehbaz Sharif tweeted.

“Imran Khan is so weak that he is afraid of criticism on himself lest people become aware of the truth about him. “Journalist Mohsin Baig was dragged in front of his family and arrested as if he was a terrorist,” he said.

The PPP chairman said under the PTI’s rule, terrorists managed to flee while journalists were arrested. He called on the government to immediately release Baig.

Post Views: 364
2022-02-17
Previous Post: Increase in prices of petroleum products is a robbery on pockets of people: Bilawal
Next Post: Chamber of Small Traders & Industries demands reduction in POL prices