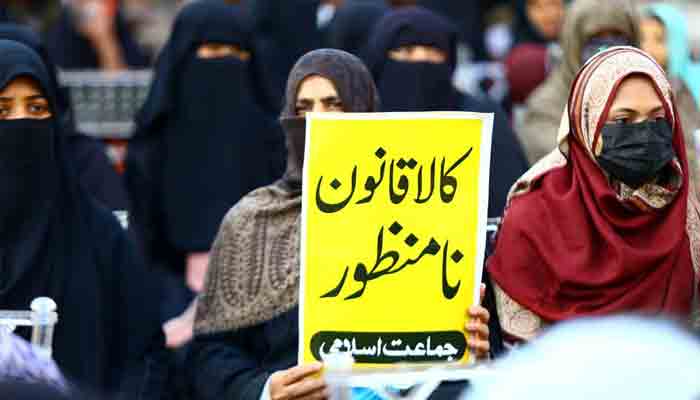 In: National
Tagged: 5 sit-ins, black local bodies law, Dharna Day 27, Jamaat-e-Islami KHI, major arteries
Dharna Day 27: 5 sit-ins on major arteries as JI intensifies movement against black law
Engr Naeem says only ambulances to be passed by designated points
KARACHI ( Web News )
Jamaat-e-Islami (JI) Karachi has intensified its movement against the black local bodies law and announced to hold sit-ins on Friday, January 28, at fiver major roads of the megalopolis while the main camp outside the Sindh Assembly building will also be continued.
On the 27th day, an art competition was held at the sit-in, showing the miseries  of the metropolitan. Delegations of several communities also visited the sit-in to express solidarity with the JI.
Speaking on the occasion, Engr Naeem said that in the next phase the JI is going to hold sit-ins at Maripur Road, Lasbella, Drug Road, Super Highway and National Highway.
He said that the MQM and the PTI, despite the claims of mandate, were holding token protests. He said that ironically the PPP itself was taking out rallies in the name of rights but it was denying rights of millions of people.
The JI leader said that the PPP will have to withdraw the black law. He said that Bilawal Bhutto Zardari asks for not to calling it a black law. He added that the JI would accept the plea and will not call it a black law only if the PPP leadership amend it to a white one.
He asked Bilawal Bhutto Zardari to own Karachi instead of handling it like a target to plunder.
He further said that PPP’s minister Saeed Ghani Khaskheli has been trying to portray the JI’s struggle as a tussle between rural and urban parts of the province. However, Engr Naeem made it clear that the JI has been demanding rights for the citizens across the province.
Engr Naeem said that contrary to the constitution, the PPP government in Sindh has usurped the rights of local government setup in the province. He demanded of the government to provide share to Karachi in resources as per the city’s contribution to the national exchequer.
Post Views: 383
2022-01-26
Previous Post: Sri Lankan high level trade delegation led by Dr. Bandula Gunawardhane visits RCCI
Next Post: M. Musaddiq Abbasi appointed as PM’s Adviser on Accountability & Interior