5th Steering Committee commits new frontiers in delivering justice for the citizens of Balochistan Mr. Ziaullah Langau Adviser to the CM , GoB appreciated the progress since its inception to date

The Steering Committee on the Rule of Law (RoL) Roadmap Balochistan convened its fifth stock take meeting on 18 January 2022 in Quetta underscoring a high-level commitment from the key stakeholders towards advancing the rule of law reforms in Balochistan. 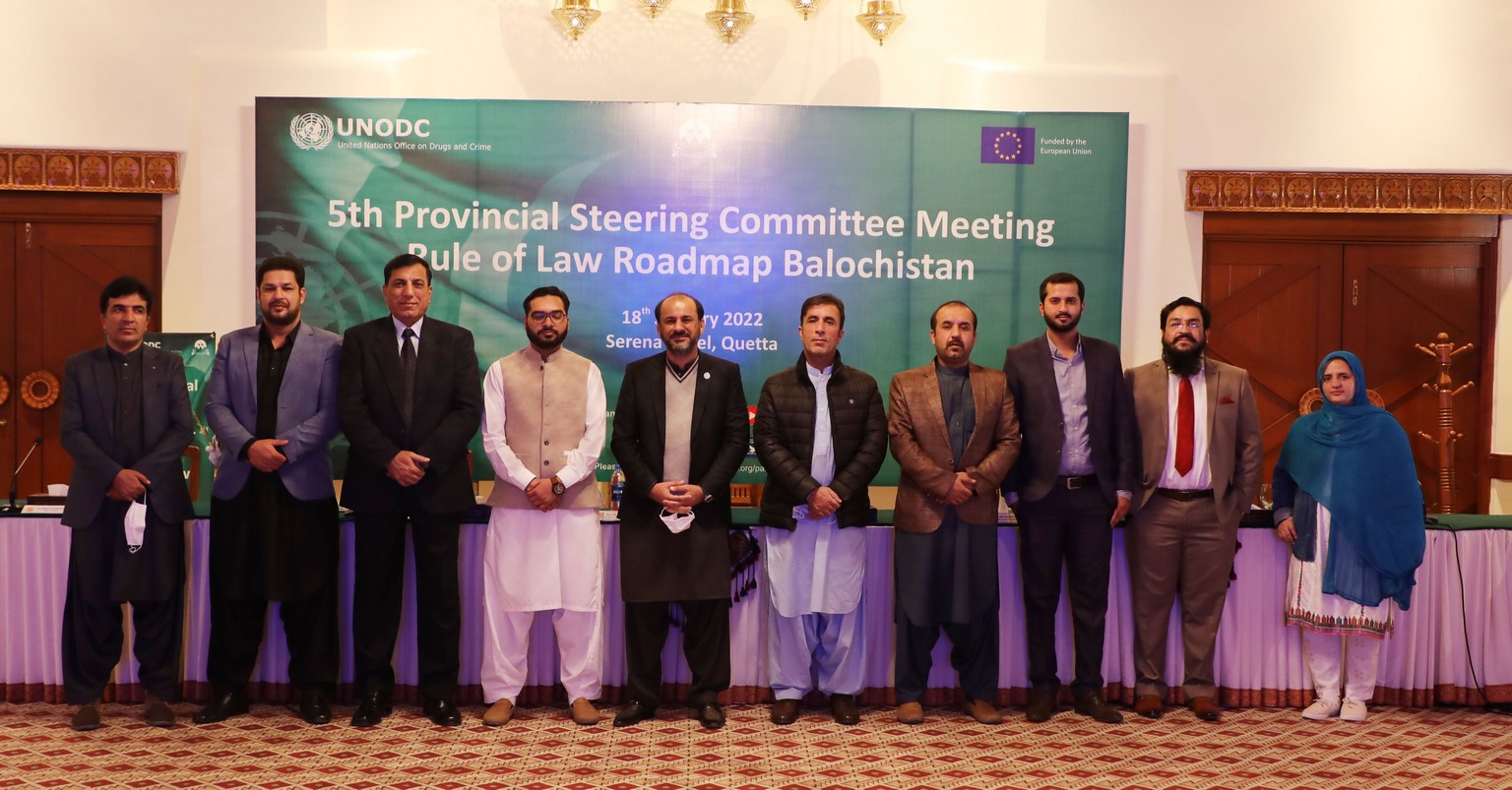 The event marked a milestone achievement in providing a convergence platform to the development partners and rule of law institutions to deliberate on the progress and achievements of the Rule of Law Roadmap that has been a flagship project of the Government of Balochistan. Mr. Ziaullah Langau, Adviser to the Chief Minister on Home & Tribal Affairs, GoB appreciated the progress since its inception to date. The project is being implemented by UNODC and graciously supported by the British High Commission till March 2021. The commitment of the Government of Balochistan has led to the development of the PC-1 and allocation of PKR 500 million for the implementation of sustainable rule of law reforms.

Mr. Sven Ruesch, Acting Head of Cooperation, European Union Delegation to Pakistan commended the achievements of the Rule of Law Roadmap project so far that offer a strong base to implement the next generation of rule of law reforms supported by the EU-funded programme. Mr. Ruesch further conveyed the message from the EU Ambassador Mrs. Androulla Kaminara that the EU regards rule of law as a cornerstone for development, peace and security for the people of Balochistan, particularly women and girls and is looking forward to continuing its support in the coming years. 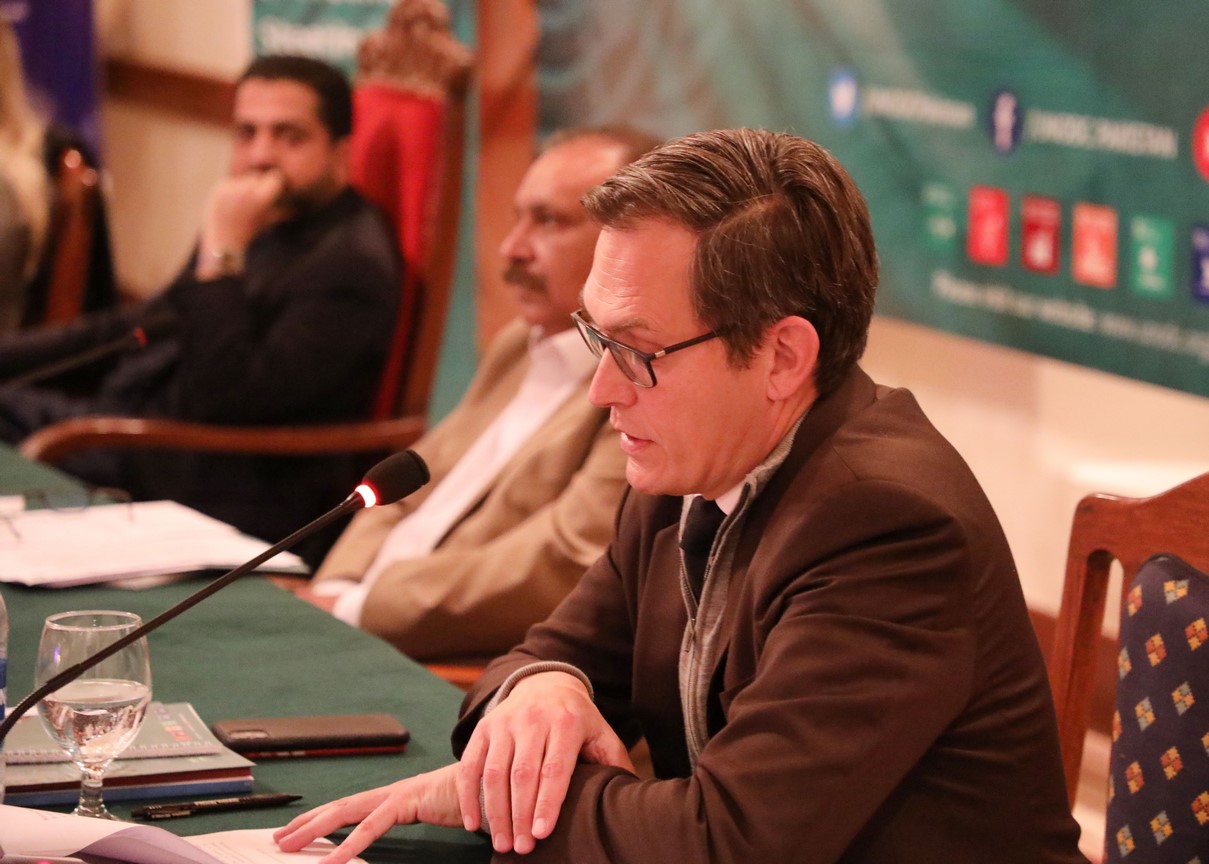 Representatives from the partner agencies of UNDP, UN Women and UNODC shared their implementation plans, identifying collaborative synergies as part of the EU-funded Rule of Law Programme. Ms. Jacqui Ketunuti, Deputy Country Representative & RoL Advisor of UN Women underscored the significance of collective efforts towards provision of enabling rule of law to realize the rights of women, girls and marginalized groups, while minimizing the forms of gender-based violence through continued reforms in the justice sector. The Resident Representative of UNDP in Pakistan Mr. Knut Ostby highlighted their strategic commitment towards supporting the ongoing reforms through transformative activities envisioned under the EU-funded Rule of Law reforms. 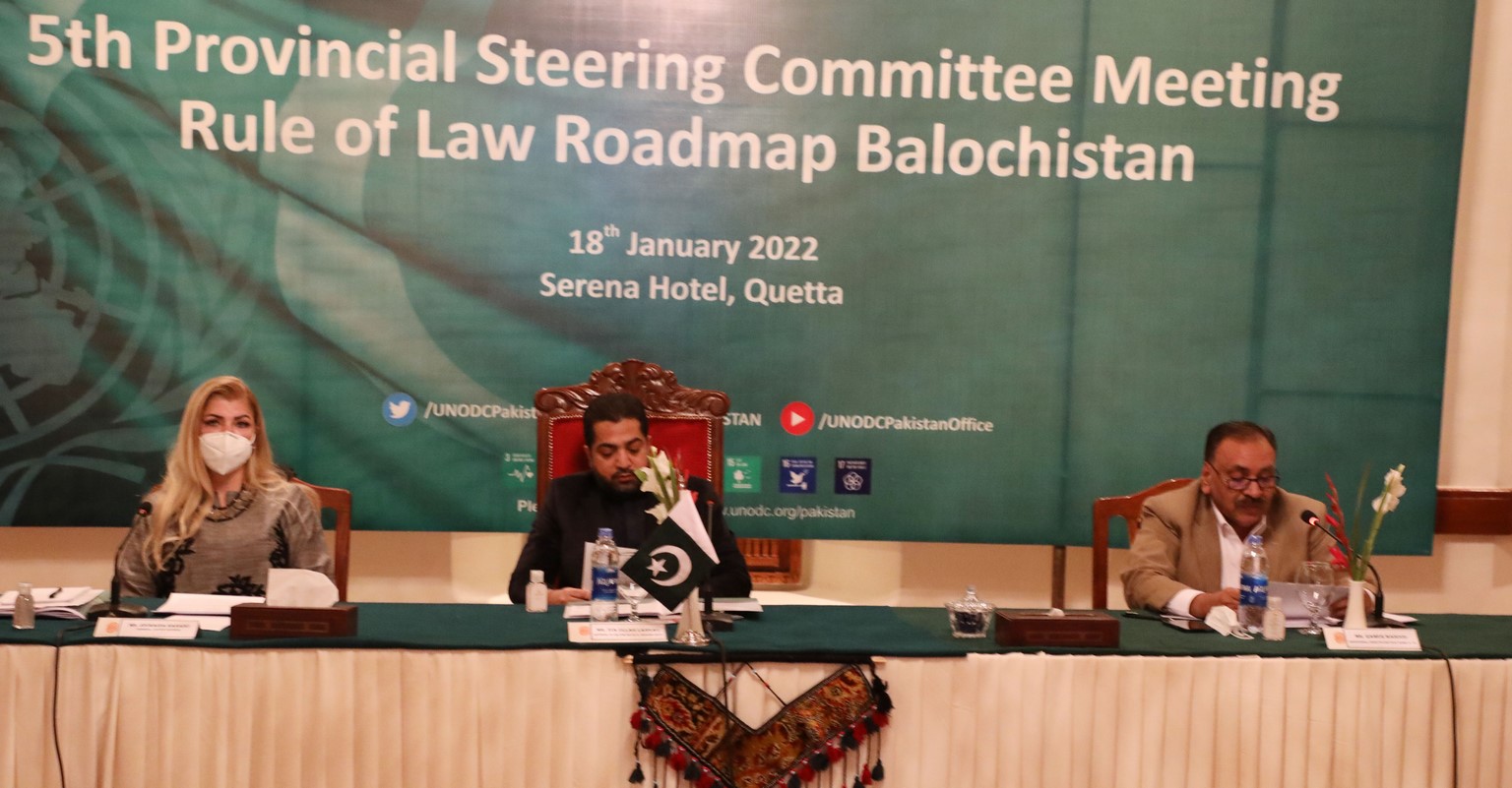 Ms. Jouhaida Hanano mentioned the UNODC contribution towards the baseline data and provision of an evidence-driven interface through the Database Management Information System (DBMIS). The Delivery Unit updated the forum on the progress through a demonstration of the DBMIS and website as well as sharing the process of data stock takes.

Despite unprecedented challenges during the pandemic, the pioneering work led by the roadmap was acknowledged as a groundbreaking effort towards delivering a robust regime of rule-based governance in Balochistan.

Post Views: 229
2022-01-19
Previous Post: An agreement Pak & UK for repatriation of criminals to be signed in the best interest of public
Next Post: ECP directs authorities to make public entire audit report foreign funds of PTI