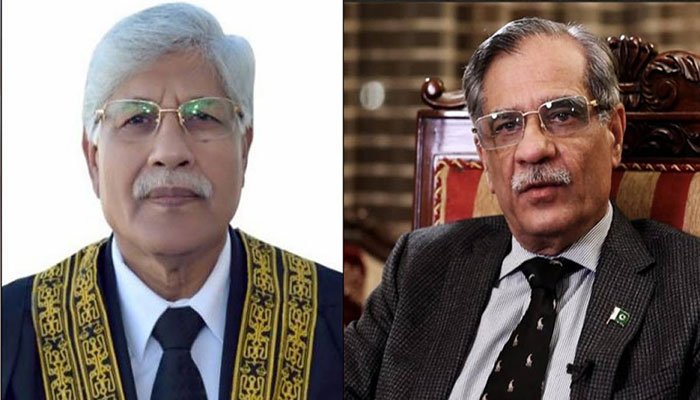 Rana Shamim signed an affidavit against Mian Saqib Nisar in the office of Nawaz Sharif: Fawad

Says appointments made on party positions on Saturday are temporary

He said new revelations have once again proved that how Sicilian mafia is capable of blackmailing institutions including the courts.

As per the report shared by the minister, “Rana Shamim, former chief judge of Gilgit-Baltistan took the oath and signed an affidavit in the office of none other than Mian Nawaz Sharif, trying to incriminate former chief justice of Pakistan Mian Saqib Nisar and honorable sitting judge of the Islamabad High Court.”

Meanwhile Fawad Chaudhry in an interview with a private TV channel said that we want Nawaz Sharif to return back tomorrow, adding that Nawaz Shairf should come back and face the cases against him. He said that if Nawaz Sharif is aquitted in the cases then it is good and in which cases he has been convicted and his appeals are rejected then he should pay the money and live wherever he likes.

Fawad Chaudhry said that he was not able to understand why Election Commission of Pakistan (ECP) is delaying the matter of the Electronic Voting Machines (EVMs).

Fawad Chaudhry said that the appointments made on party positions on Saturday are temporary, adding that constitutional election committee of the PTI is being formed and later on the election will be held in the party on permanent basis. He said that currently at high level appointments have been made in the party and further appointments will be made at low level positions in party.

Meanwhile Chaudhary Fawad Hussain has expressed sorrow over the demise of the mother of former Cricketer Shoaib Akhtar. The Information Minister prayed for the departed soul.

In another tweet, Minister of State for Information and Broadcasting Farrukh Habib also has expressed sorrow over the demise of the mother of former Cricketer Shoaib Akhtar.