Pakistan strongly condemned the vandalization of several mosques, houses and shops of Muslims by radical Hindutva mobs in Tripura, India. These senseless attacks are continuing since last week.

Foreign Office Spokesperson Asim Iftikhar Ahmad in a statement issued on Friday said that the state machinery has reportedly not only failed to protect Muslims and their properties but remained non-responsive to desperate calls for help by the local Muslim organizations. 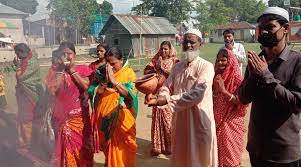 He said that it is reprehensible that the Hindutva driven BJP-RSS combine has a track record of conducting massacres and systemic human rights violations of Muslims under its watch, from Gujarat in 2002 to New Delhi in 2020.

Asim Iftikhar Ahmad said that in today’s India, there is little space for minorities and their way of life. It is equally condemnable that targeted and brutal eviction of Muslims from their decades-old homes in Assam continues unabated. He said that Pakistan calls upon the international community to play its role to stop the rising tide of Islamophobia and attacks against minorities particularly Muslims in India, and ensure their safety, security and well-being and protection of their places of worship and heritage sites.

Post Views: 367
2021-10-29
Previous Post: No group or entity will be allowed to cause public disruption or use violence to pressure govt: PM Imran Khan
Next Post: Gas companies to streamline supply of gas to fertilizer units