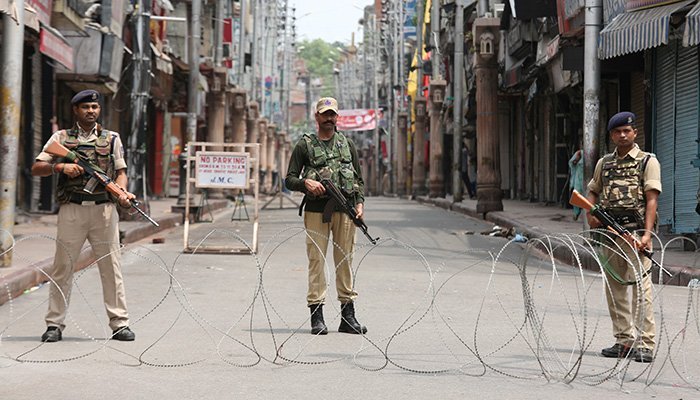 A reinforcement of Indian soldiers and police was sent to the area, said Lt. Col. Devender Anand, an Indian army spokesman adding that the fighting was ongoing. Monday’s fighting comes amid a sweeping crackdown by Indian forces in the Kashmir Valley following a string of killings in Srinagar last week. Police detained over 900 people for questioning. Earlier, more than 900 Kashmiri youth were arrested by Indian police in the occupied territory.

All of the detained youth were picked up by police on fake charges of being over-ground workers of freedom fighter.

Indian media claims that the arrests have been made in one of the biggest ever crackdown operations launched by India in the Valley.

The operation has been launched on the pretext attacks on some civilians in Kashmir, which killed a Kashmiri Pandit businessman Makhan Lal Bindroo and two teachers.

It is worth mentioning here that All Parties Hurriyat Conference and other Hurriyat organizations in their statements have described the killing as the artifact of Indian secret agencies to defame the ongoing freedom movement in occupied Kashmir. The APHC has demanded a probe into the killings by the United Nations.