To another question, he commented that he foresaw a new alignment of the PML-N and PPP emerging close to the 2023 general elections.

“Individuals represent institutions,” said Sheikh Rashid. “You don’t become a corps commander without performing duties at tough terrains such as mountains and deserts,” he said, speaking of former DG ISI Faiz Hameed. This was stated by Sheikh Rashid Ahmed while addressing a press conference in Lahore. 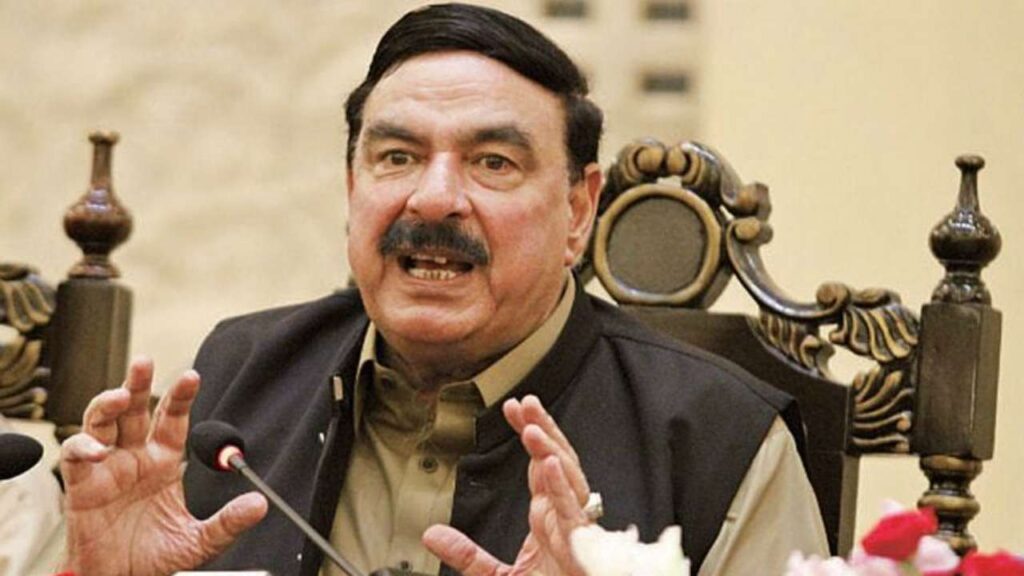 Reacting to former prime minister Nawaz Sharif’s earlier statement on reconciling with the PML-N’s opponents for maintaining the rule of law in the country, the interior minister said the “ship has sailed”. Sheikh Rashid said that Shehbaz Sharif speaks of reconciliation and Maryam Nawaz sweeps over it by making aggressive statements against the army. Sheikh Rashid said that Maryam Nawaz’s statements against state institutions are irresponsible adding that she would be responsible if PML-N’s politics ends tomorrow.

Speaking about the NAB ordinance approved by the prime minister, Sheikh Rashid said it was a “legal step taken to remove objections raised by people and the business community.” He said it was a “calculated step” by the government, reiterating that it had been taken to facilitate people.

When asked why he was kept out of the loop on the government’s discussions with the Tehreek-e-Taliban Pakistan (TTP), Sheikh Rashid said it was Pakistan’s wish that Afghanistan’s soil would not be used for subversive activities. “No talks, as per my knowledge, have taken place yet [between the government and the TTP],” he stated.

Speaking about the General Elections 2023, Rashid said only two years are left in the government’s constitutional tenure, adding it plans to spend the six months of its rule in electioneering campaigning.  However, he predicted that a “new alignment between the PPP and the PML-N” would emerge for the next elections.  “I am Imran Khan’s companion; I came with him and will also go with him,” he added.

In response to a question, Rashid said it “has been proven” that India had a hand in New Zealand’s last-minute withdrawal from Pakistan. “I am saying this to you after a thorough verification. The security personnel that we deployed for the New Zealand team were more in number than the soldiers in their army.”

He said 8,000 security personnel were deployed to keep the New Zealand team safe while “they [New Zealand Army] are only 7,800 in number”. Sheikh Rashid said that Pakistan would continue aid to Afghanistan, without caving under any pressure from the rest of the world. “They (Afghans) are our brothers, and they are our neighbours,” Ahmed said, adding that as had been clarified by Prime Minister Imran Khan, once the world moves towards making a decision on Afghanistan, Pakistan would follow suit.

Following the Taliban takeover of Kabul in August this year, Pakistan has consistently called for recognition of the new Taliban government, assistance for averting the looming humanitarian crisis in Afghanistan, and resumption of development aid for the new administration for preventing an imminent economic collapse there. This has dominated Pakistan’s foreign policy agenda for the past few weeks.

And while most of the Western countries have expressed interest in engaging with the Taliban and promised humanitarian aid, they have been reluctant to formally recognise the group as the government in office in Afghanistan and provide development assistance that has historically funded the functioning of the state institutions there.

Sheikh Rashid Ahmed said transfers, promotions and postings in the armed forces were a routine occurrence and “targeting sensitive department was the height of irresponsibility”.

On the issue of Covid-19 vaccination, Ahmed claimed that it was being made questionable deliberately, as part of a conspiracy.

“Breaking news of the vaccination of the dead is also being aired. In doing so, who is being served?” the minister asked, without referring to any particular incident of such nature.

He went on to say that making vaccination questionable was akin to strengthening the enemy at a time when the common man was to benefit from the decisions taken on controlling the pandemic by Prime Minister Imran Khan and the National Command and Operation Centre.

Replying to a question on the recently promulgated National Accountability Ordinance, the minister maintained the move was aimed at facilitating the people and businessmen.

To another question, he commented that he foresaw a new alignment of the PML-N and PPP emerging close to the 2023 general elections.