Glowing tribute has been paid to renowned intellectual and Kashmir freedom movement stalwart, late Shaikh Tajammul-ul-Islam for his valuable and matchless services to Kashmir cause 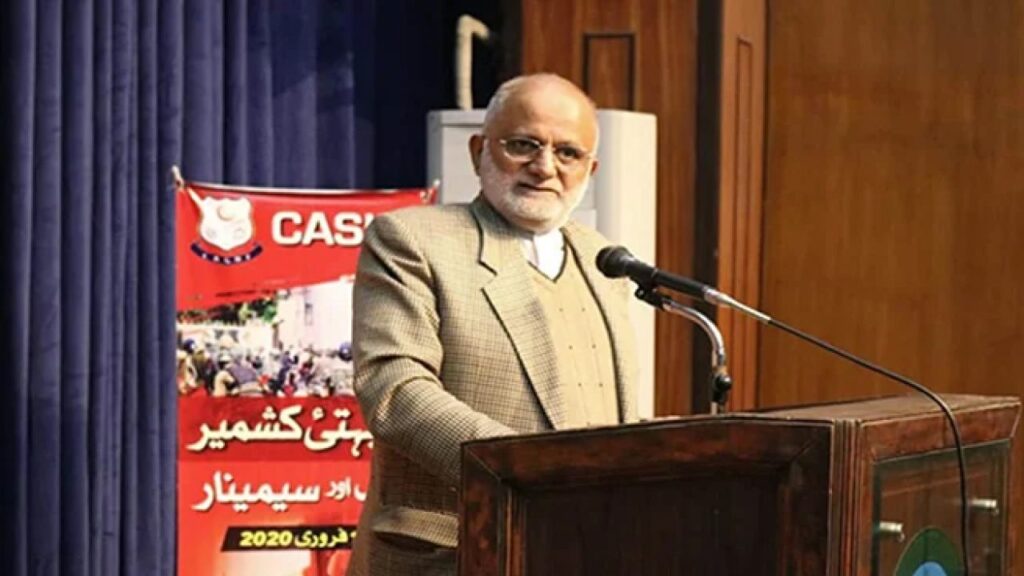 The reference was organized by a group of Kashmiri Journalists at the National Press Club (NPC) and was presided over by Chairman Al-Basira Trust & Deputy Secretary General Milli Yekhjehti Council, Saqib Akbar, to pay tribute to the deceased intellectual, also known as Mohsin-e-Kashmir, for his contributions at different fronts for freedom of Kashmir.

Speaking on the occasion, chairman Al-Basira Trust, Saqib Akbar said that Shaikh Tajammul-ul-Islam, who remained Executive Director Kashmir Media Service (KMS) till he breathed his last on September 05, was an unsung hero of Kashmir movement.

He said that the deceased intellectual has practically made the KMS as an ideological movement, where from every development of Kashmir is being monitored and disseminated, expressing the hope that this mission would continue.

He stressed the need for compiling works, sayings and other ideological material of the deceased to carry forward this ideology to upcoming generations adding that the best tribute to the deceased soul was to continue his mission with high spirits.

Speaking on the occasion, Editor-in-Chief Sabah, Shakeel Ahmed Turabi said that Shaikh Tajammul was an asset of Kashmir freedom movement, who had headed Jamiat-e-Talaba of occupied Kashmir besides remaining Chief Editor Azan newspaper.

He said that the deceased had remained steadfast on his stance on Kashmir dispute and had been advocating that the issue must be resolved through United Nations Security Council (UNSC) resolutions and in accordance with the wishes of Kashmiri people.

PFUJ former president, Afzal Butt said that Shaikh Tajammul was considered as an authority on Kashmir and highlighted the need that journalists should play their role in carrying forward his mission.

APHC leader, Zahid Safi said that the deceased was a pious soul who would regularly offer prayers till he breathed his last. He said that late Shaikh Tajammul had always raised voice against Indian illegal occupation since his youth.

Editor Daily Kashmir Times, Abid Abbasi said that the work done by the deceased on media front was recognized could be felt international level, while Kashmiri activist Dr. Mujahid Geelani said that his death was a great loss to freedom movement.

KJF President Zahid Abbasi said that the deceased had unique identity in Kashmir while Senior Editor KMS, Raza Malik said that Kashmir cause had remained his top priority, who had devoted his whole life for the sacred purpose.

Later, special dua was offered for the departed soul and for grant of courage to bereaved family to bear this irreparable loss.